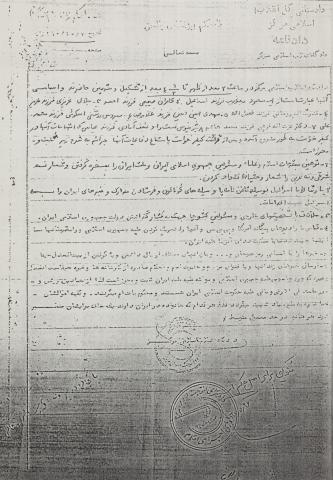 So judge amongst the people with truth [Arabic verse]

The Central Islamic Revolutionary Court, held from 2:00 in the afternoon until 4:30 [p.m.], with the presence of the accused, whose names are: 1- Mahmoud Majzoub, son of Esmail; 2- Kamran Samimi, son of Ahmad; 3- Jalal Azizi, son of Aziz; 4- Ghodratollah Rowhani, son of Fazlollah; 5- Mehdi Amin-Amin, son of Gholamreza; 6- Sirous Rowshani Oskouie, son of Mohammad Ali; 7- Dr. Ezzatollah Forouhi, son of Mohammad Hashem; Jinous Naimat [illegible] Najafabadi, daughter of Abbas.  Their charges were detailed in the bill of indictment.  Following their arraignment, their defence was heard, their guilt was confirmed and proven as follows:

Archives in the file of Ghodartollah Rowhani

Suburban Trib: Interview with Samira Samimi about the execution of her father

Poems by Dr Sirous Rowshani, in his own handwriting