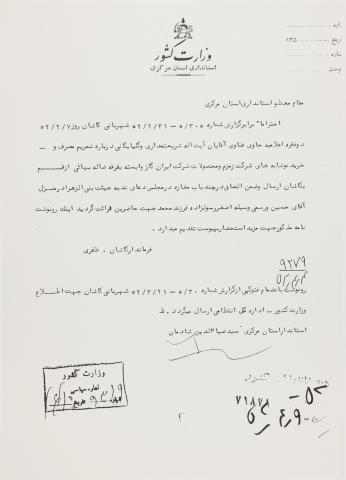 Honourable Governor of the Central Province

[I would] respectfully convey that, according to report number 5/305, dated 31 Ordibehesht 1352 [21 May 1973] of the Kashan Police Department, on 7 Ordibehesht 1352 [27 April 1973] two announcements containing the religious decrees of Ayatollahs Shariatmadari and Golpaigani were sent from Qum to Kashan, regarding the prohibition of the use and purchase of soft drinks that are produced by the Zamzam Corporation and the products of the Iran Gaz Company, which are connected to the perverse Baha’i sect.  In addition to being posted on the doors of a few shops, they were read by Asghar Rasoulzadeh, son of Mohammad, to the participants in the gathering of the mourners of Bani-Zahra group at the home of Mr. Hossein Rasmi.

We attach that letter now for your information.