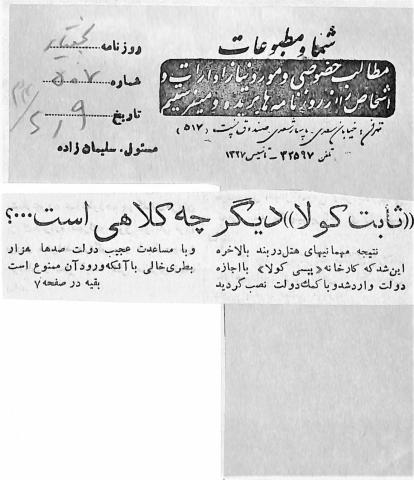 What Kind of Scam is the “Sabet Cola”…?

The result of the entertainments at the Darband Hotel was finally the government’s permission to import the Pepsi Cola plant. With the help of the government it was installed, and hundreds of empty bottles—though their import was forbidden—were imported through the government’s strange assistance and a big quantity of dirty raw material of Pepsi Cola was imported from America and water was added. By calling it  “Sabet Cola” or “Pepsi Cola”, it was poured into the throats of the miserable people of Iran, and [a huge amount] of the country’s wealth found its way to America, through the hands of Mr. Sabet Pasal.

Observe, for the sake of God! In a country which extends its begging hands to all sides for building a dam, a textile [mill], or an electricity or a cement factory, the government allows a Baha’i Jew to bring in a non-productive and harmful device, which, from its bottles and raw materials to its marketing advertisements, is made in the United States, and in Iran only water is added to it; thus they remove the wealth of the country.

The manner in which Sabet has defrauded the people of Iran, with the help of the government, so that the “Sabet Cola” would be poured into the throats of the people, is a total disgrace.

Why was it necessary that, as it is said, eight million tumans of the country’s money goes out in a lump, and exorbitant sums of money are spent on it every year, so that this dirty, rotten syrup would be poured down the throats of the people? What was the need for this, except that Mr. Sabet Pasal, with the help of the government as usual, would receive millions of dollars of commission rights in order to take away the wealth of the country and thus mock the Iranian people? Is [building] the Pepsi Cola [factory] creating a productive start-up? What could not be done with this money?

Thus, when they apply the income tax, they exempt people such as Sabet, and they even forgive up [tax exempt] to 10% of their investment income.

Is there an authority in this country to respond to us and explain what was the need for pouring this polluted water into the throats of people and transferring [enormous amounts] of the country’s wealth abroad?

Ebrahim Esrafilian, the Member of the Parliament from Tehran: “Baha’is Party is made by the British and Israel”

Jomhoury-e Eslami Newspaper quoting Hojatoleslam Rafsanjani: The instructions of the Zionist regime in Israel is carried out by the Baha'is in Iran