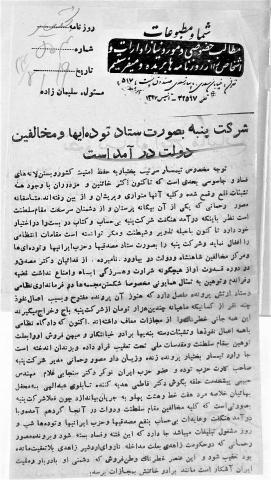 Brigadier General Bakhtiar’s special concern for maintaining the security of the country and closing the nests of corruption and espionage is [has meant] that, so far, most of the traitors and mercenaries, despite all their efforts, have been suppressed, dispersed and destroyed.

Unfortunately, Mosavar Rahmani, who is one of these traitors and staunch enemies of the monarchy, [because he possesses] an unsurmountable and unaccountable income from the Cotton Company, has been able to deceive the law enforcement authorities with his trickery, mischief and imposture and turn the Cotton Company into the headquarters of devotees of the Mosaddegh, Party of Iranians, the Tudeh Party and the centre of opposition to His Majesty the King of Kings and the government.

He was one of Dr. Mosaddegh’s devotees, and during his reign did not refrain from engaging in any evil and mischief.

The events of the referendum and insults to His Majesty’s image, especially the breaking of statues in the military governorate and the army headquarters, have a detailed case, which is still open, and due to the influence of a few people who receive several thousand tumans every month from the Cotton Company as bribery and kickback, all these dangerous people have been exempted from punishment.

Now that the court martial, despite all influences and intrusions, has prosecuted and imprisoned his traitorous and treacherous brother for insulting the monarchy and the national sanctities, it behoves Brigadier General Bakhtiar to prosecute the harmful and ongoing case of Mosavar Rahmani, the director of the Cotton Company, the possessor of a Tudeh Party [membership] card, and a member of the Iran Party, the subservient to Dr. Sanjabi, a servant to Engineer Habibi, and an attendant to Dr. Fatemi, the donor of the Abdullahi’s [sic] image to the Baha’i Assembly [Centre]; in short, the fraudsters’ man.

Since the Cotton Company is currently in a situation in which all the opponents of the monarchy and government assemble there and with huge and unaccountable revenues, campaign in favour of Mosaddeghis [devotees of Mosaddegh], the Iranian Party and Tudeh Party, day and night, it is appropriate that this sedition and corruption be ended and the case of Mosavar Rahmani, which, during the time of Zahedi’s governance, due to Ardeshir Zahedi’s inappropriate interference, had remained unattended, to be prosecuted and this dangerous and unpatriotic element, whose enmity toward the imperial court and the nation of Iran is obvious, similar to his traitor brother, will receive its punishment.