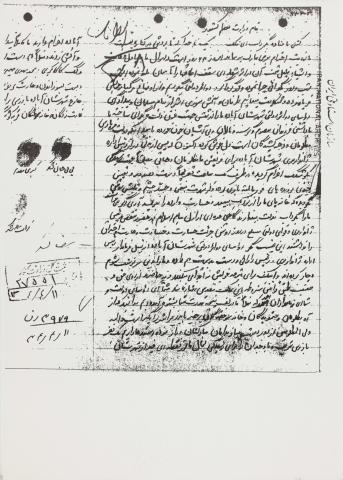 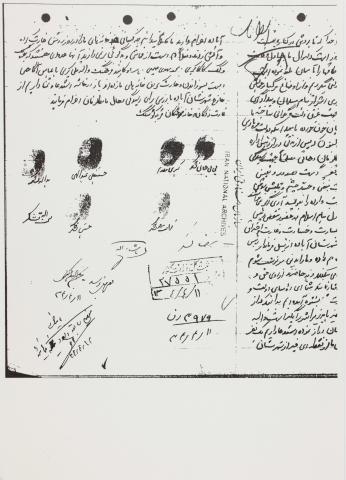 Respected Minister of the Interior,

Our ship is fallen into a swirl, O heaven

No sailor in command to guide it to the shore

With utmost respect, we would like to submit that it has been 23 days since our belongings were plundered and pillaged. The few remaining objects [illegible] burned in a flame that burned through the ceiling to the height of the sky. Night and day we graze in the field of mendacity, wandering around the government offices, crying aloud for our deathlike destiny, complaining about our gloomy fate. Storm and fire produced by the wicked [people] called Muslims, and injustices committed by the heads of the government offices of the City of Abadeh have attacked us from all six sides to the point of wretchedness and anxiety. We have innocent, hungry and groaning children with no abode, only tasting our hearts’ blood, and we are making ourselves vainly happy and hopeful that the government is the reliever of the pain of the oppressed and the downtrodden.

Now, after a long time, the head of the gendarmerie of the City of Abadeh, with the purpose of tricking these oppressed villagers, has conveniently been sent to Kushkak to investigate the case. During one hour only, he very light-heartedly made up some fake files, in order to “formalize” the case. He was so prejudiced and self-centred that neither his eyes nor his heart were ever touched. He never looked at our houses to see the extent of the damages and to record our losses.

Certainly, if they did not intend to drown us in the swirl of wretchedness, no malefactor would ever dare and have the courage, in the name of Islam, to plunder and set on fire our possessions, in the light of day and in the presence of the head of the gendarmerie and armed forces. This is nothing less than a plot of the heads of the government offices of the City of Abadeh, such as the governor, the head of the gendarmerie and the head of finance that has placed us in such a sinister position. Now, to exonerate themselves, they refrain from taking any action, nor they are ready to behave as the constitutional laws of this sacred nation dictate.

O ye, the government bodies, O ye who are vested with authority, in whose powerful claws we are powerless and harassed, abstain from the sighs of the oppressed, the downtrodden, whose homes are burned down, because it has burning sparks, and God is the protector of the oppressed. From afar, we are stretching our pleading hands to your honour and requesting you to send us a noble and conscientious inspector, from somewhere other than Abadeh, to investigate our case. We are well aware of those who, in the light of day, plundered our houses and set them on fire; even now, they do not stop slandering and insulting us. They are those who, with the incitement and the help of Kaka Karimi, Mohammad-Mehdi Samimi, both employees of the Department of Culture, and Allah-Qoli Karimi with Abbas Agahi, have set our houses on fire.

Again at the end, we plead with you to send an inspector from outside of Abadeh to come and investigate the state of these oppressed ones.

The plundered and those whose houses have been burned of the Village of Kushkak:

[Handwritten notes at the bottom of the letter]

Registered at the Office of the Ministry of the Interior

[Signature on the name]

Enclose the records of the case