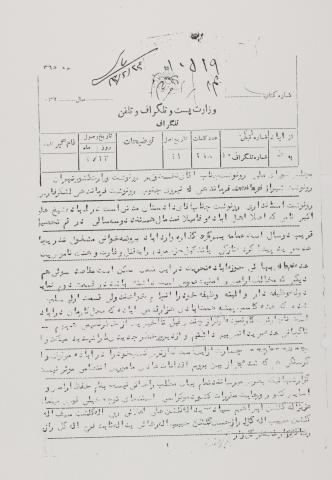 Telegram from: Abadeh to Tehran

Copy: His Honour, the Prime Minister,

Copy: Tehran, Ministry of the Interior,

For [the last two years], a person in Abadeh, by the name of Sheikh Ali-Akbar, who is originally from Abadeh and is a felt-maker by family profession, after a couple of years of studying in Qom, has been putting on a turban and performing religious ceremonies. He has gradually been attracting some followers. Recently, he has organized a sect, encouraging and inciting the people in the district of Abadeh to slay, plunder and violate the honour of the Baha’is. He may have some other subversive motives for threatening the general peace and tranquillity.

The second [part of this matter relates to] the representatives of the government, who have their obligation and, of course, perform their duties to the extent necessary. But the first part is being omitted, regarding a group of tradesmen of Hemmat-Abad, a distance of a thousand feet from Abadeh, who, under the pretext that Abadeh is the place of their work, have quit their jobs out of desperation. If, so far, we have been afraid of a sudden and dangerous attack by the followers of Sheikh Ali-Akbar, a new danger has been threatening us since yesterday. Our assertiveness is because of fear. If we stop our trades in Abadeh, we will perish from hunger. The ordinary actions taken by the disciplinary agents are not effective. What they report is not a description of the whole story.

We plead for your urgent attention in the name of national peace and tranquillity and observing the national democratic rules.

[Handwritten Note:] Write to the Ministry of the Interior