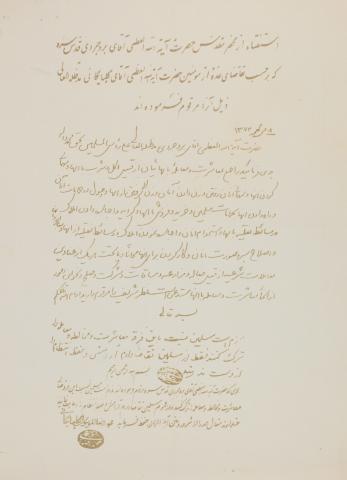 The following is the fatwa issued by Grand Ayatollah Mr. Borujerdi, which was issued at the request of some of the followers of Grand Ayatollah Golpayegani, may his great shadow be perpetuated:

Grand Ayatollah Mr. Borujerdi, may God grant the Muslims his prolonged shadow, what does Your Honour, Grand Ayatollah Borujerdi, may your widespread shadow extend over all Muslims for the sake of Muhammad and His family, say about the Muslims’ socializing and conducting transactions with the Baha’is in matters such as drinking and eating with them, inviting them and celebrating with them, visiting them [in homes], taking a wife from [marrying] them, entering their baths and/or allowing them to enter the Muslim baths, making business deals with them, leasing their property and vehicles, employing them and lending them our properties and vehicles, seeking medical treatment from them, using their barber shops, working for them―either gratis or under any of the Sharia transactions, such as wage payment―engaging in any kind of cooperative farming and sharing irrigation rights with them, having partnership and trade agreements, and being in peace with them at the time of association and transactions with them? We plead with you to express your honourable opinion in writing, May God extend your shadow.

-In the Name of God; it is necessary for Muslims to leave the association, apposition and dealing with this sect. I just ask the Muslims not to lose their peace and order.

-In the Name of God the Merciful, the Compassionate, As His Holiness Ayatollah Borujerdi, may God sanctify his grave, has written, “It is necessary for Muslims to leave the association, conversation and trading with this perverted sect, and I ask all Muslims to observe calm and maintain order.” May God Almighty protect everyone from the evil and sedition of the end times. Mohammad-Reza Al-Mousavi Al-Golpayegani