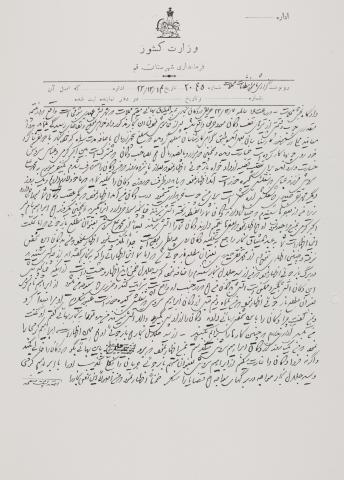 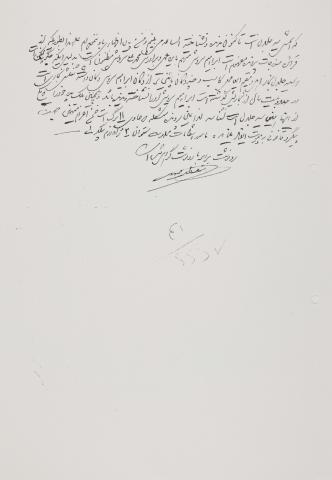 Governorate of the City of Qom

Copy of the Report of Disciplinary Agent of Mahallat

At 16:00 [Sunday] 7 Esfand 1322 [27 February 1944] a fire started at the carpentry shop of Abdol-Misagh, a Baha’i from Mahallat whose surname is Ahdi Shoghi. As a result, some timber and roof-beams of the shop were burned. After extinguishing the fire, the mentioned carpenter sought justice and requested investigation. In the first instance, a local inspection was conducted with the presence of experts. According to their judgement, it became clear that his loss had been an amount of five thousand rials plus [the value of] three months of work of the carpenter and his two assistants, spent on the woodwork which has been damaged. Also, an amount of two thousand five hundred rials has been the loss of the owner of the shop, which is shared between Akbar Karami and Abbas Soroush.

Following up with the matter from the justice seeker who was interrogated, he said, “After fifteen days of having occupied the shop, a person by the name of Mohammad-Ali Soroush, son of Abbas, a maker of cotton shoes, came and stated that the shop should be vacated within two days, because [they] needed it for [them]selves. Another day, Mohammad-Taqi Heidari, who is a sawyer and used to buy wood for me, came to my shop and asked if there was a hole at the back of my shop. He said that [he had] heard that some people had the intention of throwing kerosene and setting the shop on fire. If there is a hole, [he said], fix it. Again, on another day, a person by the name of Ebrahim, son of Akbar Karami, came to me and the first thing he said was that some people had decided to set [my] shop on fire”.

Later on, when Mohammad-Ali Soroush—familiar with the case—was asked, “What was the reason for your statements to Abdol-Misagh, the carpenter, regarding vacating his shop?” He utterly denied it. He said, “I have not gone to the shop of this man and have not made such a statement”.

Then Mohammad-Taqi Heidari, as [a person familiar with] the case, was asked from whom [he had] heard the statements that [he repeated to] the carpenter. On the interrogation form he stated, “I have heard from Seyyed Jalal, the carpenter,” and added that Seyyed Jalal, while telling him [that he] was terrified that if this shop [Abdol-Misagh’s shop] were set on fire one night, [his] shop [Jalal’s], which was next to his, might also be affected and [he] would also be at a loss.

Another [person familiar with] the case was a man called Ebrahim Karami [mentioned above], who was also interrogated. He stated, “About a month and a half ago, while passing by the shop of Ebrahim Soroush, whose job is making cotton shoes, he called to me and asked me, “Why did you rent your shop to this Baha’i? Regain the shop from him; otherwise it will be set on fire.” I [illegible] [repeated] what I heard to the Baha’i carpenter, and he said, “I have not hurt anyone that someone might do such things to me”.

Then Seyyed Jalal, the carpenter, was interrogated. He repeated the same statements as Ebrahim Karami, that, one day [he had been] passing by Ebrahim Soroush’s shop, who told him, “Go and tell this Baha’i to vacate the shop or tomorrow I will plunder it.” Ebrahim Soroush, as an accused person, was interrogated, and he entirely denied the matter.

Then [I] brought him face to face with Ebrahim Karami and Seyyed Jalal the carpenter. In the confrontation forms, again he denied the [previous] statements, and affirmed, “I essentially do not know the carpenter whose name is Seyyed Jalal, and have never seen him. In fact, this is the first time that I am seeing him and I have never told him such a thing.”

In any case, as it is understood from the case content, Ebrahim Soroush is being accused of having perpetrated such an action and his brother Mohammad-Ali Soroush is a suspect. The reason for this conclusion is this. How is it possible that Seyyed Jalal the carpenter, who is a resident of this locality, has been a carpenter in this vicinity for over twenty years and his shop is a few shops away from the shop of Ebrahim Soroush, [and Ebrahim Soroush] has not come to know or never seen Seyyed Jalal]? Also, [how is it that he is] not [aware of] the properties of his own father, that one of them is being occupied by Seyyed Jalal, and is now claiming that he does not know him?

Therefore, the original file prepared for the case, which contains 11 pages, along with the accused ones, are being sent for the prosecution.

This copy is identical to the certified copy