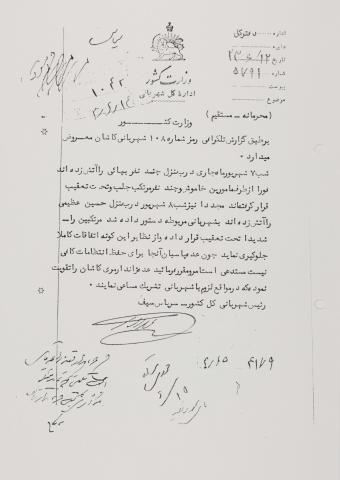 Ministry of the Interior,

According to the code-telegraph number 108, received from Kashan, the police force reports that on the night of 7 Shahrivar 1323 [29 August 1944], the doors of the houses of some Baha’is were set on fire. The [police] officers immediately extinguished the fire and arrested a few of the perpetrators. Again, on the night of 8 Shahrivar [30 August], the door of the house of Hussein Azimi was set on fire. The police were instructed to determinedly follow the perpetrators and completely stop similar occurrences from taking place. As the number of guards is not sufficient to maintain order, it is requested that you order an increase in the number of Kashan gendarmes that, they may assist whenever there is an urgent need.

The Head of the Police Force

[Handwritten Note 5:] Because Governor has considered the matter unimportant, one should await the Governor’s written report