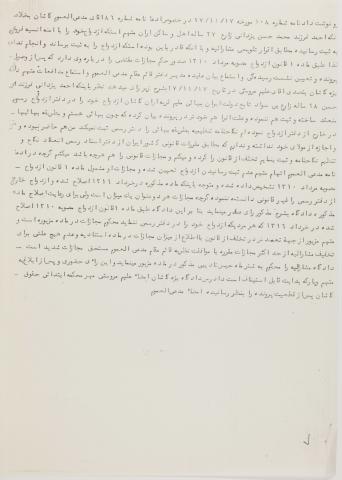 [This is a] copy of court order number108, dated 17/11/1317 [6 February 1939], regarding claim number 86 of the public prosecutor of Kashan, alleging in summary that Ahmad, son of Mohammad Hasan Yazdani, farmer, 27 years old, and native of Aran, has [not] registered his marriage to Ameneh Ensieh Foroughi. According to his implicit admission, and even though he could have registered the marriage, but did not; pursuant to Article 1 of the Marriage Act, ratified 5/1310 [July/August 1931], [the prosecution] requests an appropriate punishment for him. Upon receiving the case, scheduling a hearing, and considering the opinion of the public prosecutor, and subsequent to considering the submission of defense, the criminal court of Kashan, presided by Mr. Alim Marvesti, renders a decision on 17/11/1317 [ 6 February 1939], as follows:

Taking into consideration that Ahmad Yazdani, son of Mohammad Hasan, 28 years old [sic], illiterate farmer, citizen of Iran, Baha'i and resident of Aran in Kashan, officiated his marriage, but failed to register it, stating, “Because I am Baha'i and I have married in accordance with Baha'i laws outside the office. Bahá'í marriages are not registered at the notary publics, and I was not prepared, and did not have permission from my Master, to get married in accordance with the Civil Laws of Iran, at the marriage registry office. I recognize that I have violated the law and did it willingly, accepting the legal consequences.”

Even though, in the statement of the public prosecutor, the defendant’s charge was determined as not registering a marriage, subject of Article 1 of the Marriage Act, ratified 5/1310 [July/ August 1931], and considering that noted article was amended in 3/1316 [June 1937], to stipulate that failure for men to register their marriage in official books is not unlawful, and although both acts are the same [sic], in order to comply with the amendment of the abovementioned article, the court issues its verdict as follows:

According to Article 1 of the Marriage Act of 1931, amended in 3/1316 [May/June 1937], [which stipulates] that every man who does not marry in the registry office is condemned to punishment according to the provisions of the said article, and that the accused violated the law knowing there would be legal consequences, thus [giving the court] no mitigating factors to reduce the punishment, and in light of the fact that the prosecutor believes he should be given maximum punishment, the court hereby sentences the accused to six months of correctional imprisonment under the noted article. This verdict is [issued] in person, and can be appealed after service to the accused.

Judge of the Criminal Courts of Kashan

Neday-e Hagh newspaper: Equality of men and women proves the fallacy of Bahaism