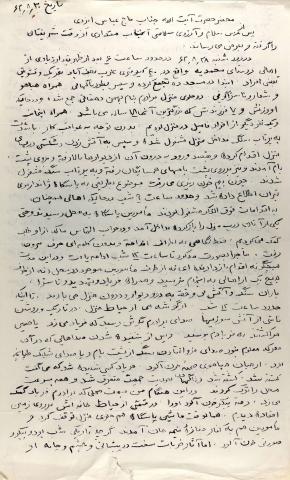 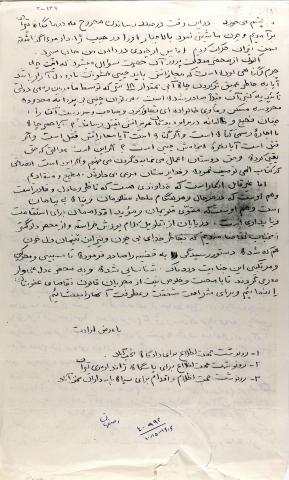 To:  The Office of his Excellency Ayatollah Haj Abbas Izadi

With greetings, I would like to take your time and draw your attention to the following:

On Saturday 28 Aban 1362 [19 November 1983] around 6 pm a large number of the villagers of Mohammadiyyih - situated some 40 kilometres west of Najafabad- having been encouraged and provoked by some individuals, first gathered in the village’s mosque and then while shouting and swearing, all of a sudden congregated in front of the home of my brother Bahman Dehghani.  At the time, he and his wife, their 7 children - the oldest is 18 years old - and I and another relative were in their home.  Without considering the consequences of their actions, they started throwing stones at the entrance of the house and then set fire to the doors.  They then climbed the walls and went onto the roof and on the neighbour’s roof and started throwing stones again. As there was a fear of bloodshed, somehow [we managed] to inform the police station in Tiran.

At 9pm while the mobs were still continuing their activities, the police officers arrived.  One of them even opened the door of the house, came in and in reply to our pleas for help, just looked around and left without saying a single word.  This attack continued until midnight and during this entire time neither a single officer nor any of the local people did anything to calm the situation and the yelling, shouting, swearing, rain of stones and fireballs showered continuously into the house.  Finally, around 12-midnight, from one of the corners of the yard and in the midst of the glowing light of the fires, we heard my brother crying out, “O Husayn, they killed me, help me.”

We then heard something that we could not tell whether it was the shower of stones or gunfire, and from among the tumult we heard someone shouting, “He is dead, he is dead.”  All of a sudden, the crowd dispersed and they all quickly left the scene.  I then went towards the place where my brother was asking for help.  I found his blood-soaked body fallen in a corner of the yard.  At that moment a police car arrived.  Although it was dark and his body and face were full of blood, one could nevertheless see the signs of heavy blows upon his forehead, eyes and chin.  We then wanted to take him to the health centre in Tiran and as there was no car available, we had to put him in the police station wagon and drove towards Tiran. A short while later, he died in my arms.

I now would like to ask your Excellency what sin he may have committed to deserve such a punishment and in such a cruel way.  Was this because of deepening the water well in his house for another 18 meters?  That work was officially approved in writing by the authorities.  Can people just enter the boundaries of someone’s home and kill the head of the family in such a cruel and heartless way before the eyes of his loved ones?  Is it a sin to dig a well with an official permit?  Even if so, is the punishment death, and even if that is so, is this how it should be executed?  If this is that justice that the Lord Almighty has ordained, we bow our heads in obedience, and if this is the fair-mindedness that the Holy Books write about, well, we abide by it and comply.

However, it cannot be denied that there exists a just God Who witnesses all and is All-Powerful.  He is the One Who assists the weak and protects the downtrodden. And He it is Who strengthens our hearts and confirms our steps to persevere and withstand.

In closing, I apologize for the length of this letter, and beg your objective conscience to issue an order for this case to be investigated, for the sake of God and also for these heartbroken orphans, so that those who were the cause and initiators of this painful crime will be identified, and be introduced to the court of justice, so that we would be able to lovingly and sincerely beseech the authorities to forgive them, and we ourselves to forgive them for the sake of a noble Cause.

1- A copy: for the information of the court in Najafabad

2- A copy: for the information of the police station in Tiran

3- A copy: for the information and action of the Revolutionary Guards in Najafabad

HRANA: House of another Baha’i citizen in Tehran raided

HRANA: Houses and shops of 3 Baha’i citizens were raided in Karaj

HRANA: A number of Baha’is detained in Marlik, Tehran

Conditions of a Baha'i couple, Mojdeh Eghterafi and Houshmand Talebi, in prison

US Congress condemns persecution of Baha'is in Iran

Nasim Samimi and Farhad Norouzian summoned and their houses searched

HRANA: Omid Ghanbari’s house and shop were raided in Sari

HRANA: Houses of Feizollah Rowshan and Sohrab Zahedi were raided in Sari