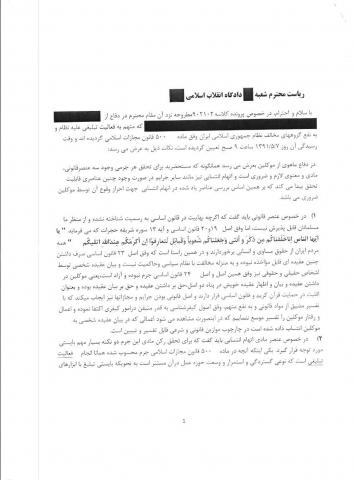 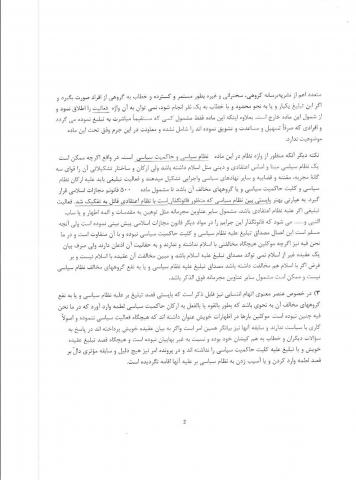 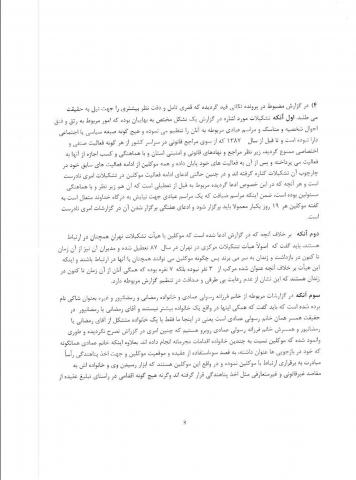 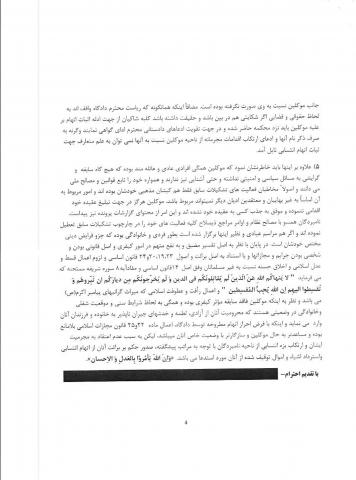 Honourable Head of Branch…... of the Islamic Revolutionary Court of ……

Concerning file reference 902102 before the respected court pertaining to ……, by virtue of which the defendants are charged with propaganda activities against the regime and in the interest of groups in opposition to the regime of the Islamic Republic of Iran, pursuant to Article 500 of the Islamic Penal Code, and for which a hearing is scheduled to commence at 9:00 a.m., on 7/5/1391 [28 July 2012], the following statement of defence is herewith submitted for your consideration:

With regard to the substantive defence of my clients, as you are well aware, for any conduct to be considered criminal, the existence of three elements—legal, material, and intellectual [mens rea[1]]—is necessary.  The alleged offence [in this case] is no exception, and can only be proven in light of the establishment of the said elements.  Consequently, examination of each of these elements is required to determine that the alleged offences have been committed by the defendants.

Secondly, contrary to what the report alleges, that the defendants are still in contact with the central coordinating committee in Tehran, it must be noted that the central coordinating committee in question was dissolved in 1387 [2008], and its members have been in prison ever since.  How would it be possible, therefore, for the defendants to still be in contact with them?  Furthermore, the group was comprised of seven members, not three, all of whom have been in prison ever since.  Such information demonstrates a lack of impartiality and lack of honesty in drafting the report in question.

Thirdly, the above-referenced report refers to Mrs. Farzaneh Rasouli Emadi, and the Ramezani and Ramezanipour families, etc., as the complainants in this case.  It should be mentioned that all of the individuals mentioned are, in fact, only one family, i.e., Mr. Ramezani, or Ramezanipour, is the husband of the above-mentioned Mrs. Rasouli Emadi.  That is to say, we are only dealing with one family here—comprising Mr. Ramezani or Ramezanipour and his wife Mrs. Farzaneh Rasouli Emadi.  The report, however, does not clearly state this information; instead it makes it sound as if the defendants have committed an offense against several families.  Moreover, Mrs. Emadi, according to her own evidence during the interrogations, has stated that her intention was to take advantage of the defendants’ beliefs and circumstances for the purposes of obtaining refugee status [in another country], and that was her primary intention for contacting the defendants.  In fact, the defendants are the ones who were used here so that she [the complainant] and her family could achieve their illegal and dishonest objectives, such as gaining refugee status.  Otherwise, there would have been no attempt by the defendants to discuss their beliefs with her.  Moreover, as the honourable justice is well aware, according to the law and judicial procedures, if there is a complaint, and should there be some truth to that complaint, the complainants must be present in court in order to give evidence to establish the truth of the allegations against the defendants, and it is based on their evidence that the prosecution can substantiate its case.  Otherwise, the mere mention of the complainants by name and their claim against the defendants of a criminal offense cannot be sufficient proof to establish guilt.

In conclusion, in light of the principle of interpretation of the law to the advantage of the defendants in criminal matters, legality of crimes and punishments, and presumption of innocence, as well as Articles 19, 20, 23, and 24 of the Constitution; and in accordance with the principle of Islamic justice and equity and ethical treatment of non-Muslims, as indicated in Article 14 of the Constitution, and the text of Surat Al-Mumtaḥinih [60:8] wherein it says, “God does not forbid you to deal kindly and justly with those who have not fought against you because of your religion and who have not expelled you from your homes…;” and by exercising Islamic mercy and compassion—a priceless treasure left to us from the beloved Prophet Mohammad (PBUH); and considering the defendants’ clear record, and keeping in mind that all the defendants, given their age and family circumstances, are in such a position that their incarceration would cause irreversible damage to their families and children; and furthermore, even if the defendants were guilty, considering that the court has the power to exercise Articles 22 and 25 of the Islamic Penal Code, which will be more appropriate for the defendants, given their particular circumstances; as the allegations have been adamantly denied by the defendants, the court is hereby asked to acquit them on all charges and order that the items seized from them be returned.

[1] [Mens rea (the state of mind when committing an act that makes a person guilty of the crime; the guilty intention that goes with doing something illegal]

[2] [Nulla crimen sine lege, nulla poena sine lege (Latin: “No crime, no punishment without a previous penal law”) is a legal principle, requiring that one cannot be punished for doing something that is not prohibited by law].

[3] [De facto is a Latin expression that means “concerning fact.”  In law, it often means “in practice but not necessarily ordained by law” or “in practice or actuality, but not officially established.”]