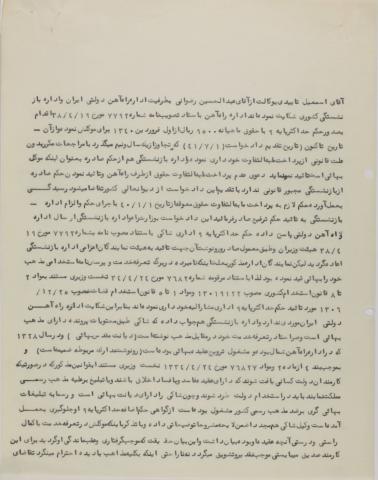 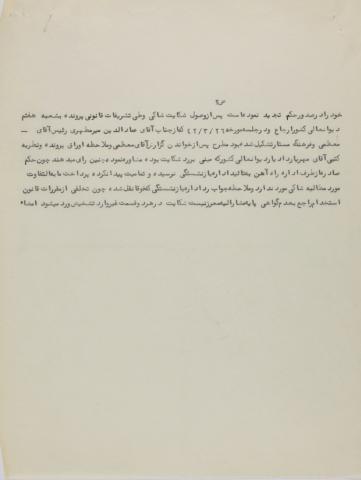 Mr. Esmail Taidi, representing Mr. Abdol-Hosein Rezvani, has filed a complaint on his behalf against the Iranian National Railways and the State Retirement Head Office.

Based on the action taken by the Railway Administration’s approved letter number 7792, dated 19 Tir 1338 [11 July 1959], which issued the order for maximum pay base of nine, [he] is demanding for his client a monthly salary of 9,500 rials from the beginning of Farvardin 1340 [21 March 1961]. From the date of submission of the petition up to the present day, which exceeds one-and-a-half years, despite frequent follow-ups, and with no legal reasons, payment of the [salary] difference has been denied and the State Retirement Head Office has not endorsed the order since the client is a Baha’i. The [refusal to pay] the difference in the salary by the Railway Administration and non-endorsement of the order issued for retirement lacks legal justification.

By filing this petition, the Supreme Court is requested to investigate the matter and issue the necessary ruling regarding enforcement of the payment of the belated salary difference from 1 Farvardin 1340 [21 March 1961] and the State Retirement Head Office is [requested] to endorse the promotion order. This petition was sent to the Ministry of Roads and Transportation and the State Retirement Head Office.

The Railway Administration has responded that the order for the maximum administrative pay base of nine for the Plaintiff, based on the approved letter number 7792 from the Cabinet Ministers, dated 19 Tir 1338 [11 July 1959], was issued and, as usual, a copy of it was returned to the dispatched delegation of the State Retirement Head Office for approval. However, the representatives of the above-mentioned office, because of the fact that the aforementioned had [written] Bahá’í as his religion in the service identification paper and the recruitment questionnaire, based on letter number 7682, dated 24 Tir 1334 [16 July 1955], from the Prime Minister’s Office, according to Articles 2 through 8 of the Public Services Employment Act, approval number 13019122, and Articles 1 through 5 of the Employment Act, approved on 25 Esfand 1306 [15 March 1928], have refused to approve the order of maximum administrative [pay] base of nine for the aforementioned individual.

According to this complaint, there is no case for the Iranian National Railways, and the State Retirement Head Office has also responded that the Claimant, according to the contents of the case file, is a Baha’i, and in his service identification paper he has explicitly written (sacred Baha’i religion) after the religion [question]. In 1328 [1949], when he was in the Northern Railway Office and was engaged in promoting the Baha’i Faith (copies of the relevant documents are attached)—and in accordance with section 4, paragraph 2, and Article 76827, dated 24 Tir 1334 [16 July 1955] of the Prime Minister’s Office, and in view of the aforementioned rules, if some among the government employees are found to have corrupt beliefs and are morally corrupt, or engage in propaganda against the official religion of the country, they should be dismissed from the government service, and because the Plaintiff is a member of the Baha’i Faith and has been formally engaged in Baha’i propaganda activities against the official religion of the country—endorsement of the order of maximum pay base of nine has been held back.

The plaintiff's attorney again made a detailed explanation in the bill [of defence] and remarked that his client had stated in the service identification paper, with complete truth and accuracy, whatever his belief is, and that this expression of truth caused him suffering and [inconvenience]. This honest employee should have been encouraged and appreciated and not be [punished because] he views all the religions respectfully. He has renewed his request for a new ruling to be issued.

After receiving the complaint of the Plaintiff and going through the legal formalities, the case file was referred to Branch 7 of the Supreme Court.  At the meeting of 26 Khordad 1342 [16 June 1963] that was convened by the Honourable Mr. Seyyed Emadeddin Mir Motahari [chief justice of the Supreme Court], Mr. Moazzami, and Farhang Mastar, after reading the report of Mr. Moazzami and considering the documents in the case file and the written opinion of Mr. Mahyar, the assistant in the Supreme Court, [the Court decided] to reject the complaint and advise that since the order issued by the Railway Administration has not been approved by the State Retirement Head Office and has not been finalized, payment of the salary difference demanded by the Plaintiff is not necessary, and considering the above-mentioned response of the State Retirement Head Office, which has rejected the complaint, because there is no definite violation of the rules of the Public Services Employment Act concerning lack of the endorsement of maximum pay base, the complaint in both parts is considered irrelevant and rejected.