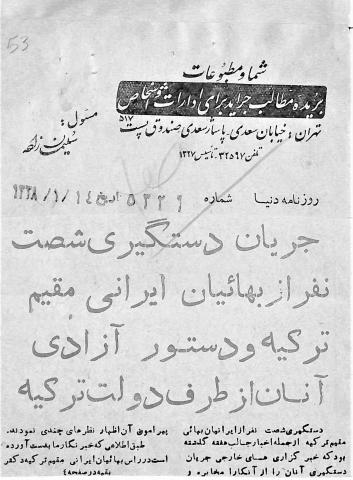 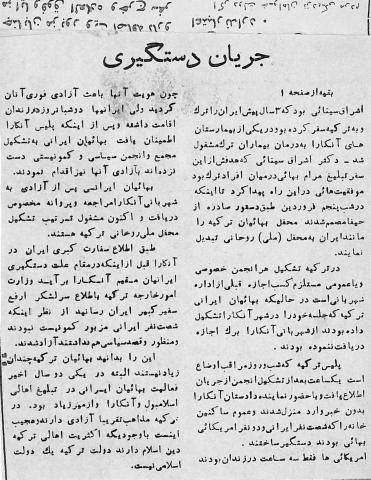 According to the information obtained by our correspondent, Dr. Eshragh Sinaie, an Iranian Baha’i living in Turkey, was among the Iranian Baha’is who left Iran three years ago and traveled to Turkey. He treated Turkish patients in one of Ankara’s hospitals. Dr. Eshragh Sinaie’s purpose for this trip was promoting the Baha’i Faith amongst the Turks. He achieved some success in this way, until on the night of 5 Farvardin [26 March 1959], according to the order issued by Haifa, they decided to turn the Baha’i assembly of Turkey, as in Iran, into a (National) Spiritual Assembly.

In Turkey, the formation of any private or public association [gathering] requires the prior permission of the police department; the Iranian Baha’is of Turkey, who had their meeting in the City of Ankara, had not received permission from the Ankara police. The Turkish police, who are controlling the situation day and night, found out about the incident one hour after the formation of the gathering and entered the house, without any [warning], in the presence of the Ankara prosecutor’s representative, and arrested all the occupants of the house―60 Iranians and two American Baha’is.

The Americans were imprisoned for only three hours because their identification led to their immediate release. But the Iranians were imprisoned for two days and nights, and after the Ankara police made sure that the Iranian Baha’is had not formed a political and communist association, they also released them. After their release, the Iranian Baha’is went to the Ankara Police Department, [where they] received a special permit, and they are now organizing a Turkish National Spiritual Assembly.

According to the Iranian embassy in Ankara, [when it attempted] to find out the reason for the arrest of the Iranians living in Ankara, the Turkish Ministry of Foreign Affairs informed General Arfa, the Iranian ambassador, that since the 60 Iranians were not communists and had no political intentions they were released.

You should know that, there are not many Baha’is in Turkey, although in the last one or two years there has been a lot of Iranian Baha’i activity to propagate the faith to the inhabitants of Istanbul, Ankara and Izmir. Religions are almost free in Turkey, and it is strange that although the majority of Turks are Muslims, the Turkish government is not an Islamic state.

Song by12-year-old Bayan Teimouri, whose mother has been sentenced to nine years imprisonment]

Roozonline: From murder in Paris to attacking Baha’is

Iranwire: I amTaraneh, and my mother is in prison

Afagh Khosravizand: My imprisoned children are asked to repent from teaching, as a condition for their release

Commander of Revolutionary Guards in Shiraz: Baha’is must be severely curbed

Roozonline: Stories of Fariba Kamalabadi’s daughter about her prison visits

HRANA: Second anniversary of the detention of the BIHE (Baha’i University) professors

HRANA: Letter from the wife of Ghavamoddin Sabetian, a Baha’i prisoner in Sari

Iran Emrooz: Why are Baha’is persecuted?

Two Baha’is beaten up and arrested, and their houses searched

New information on the detention of Moshfegh Samandari

Latest on the arrest of Shahram Hasim

Latest on the arrest of Shahram Chinian

Imprisoned Baha’i leaders visited by their families in prison

New information about the trial of seven Baha’i leaders

Seven Baha’i leaders allowed to visit their families in prison

General Prosecutor: Leaders of the Baha’i community of Iran accepted their accusations

Asr-e Nou website: Baha’is of Iran is in danger

Latest on arrested Baha’is in Kish

Latest on the seven Baha’i leaders in prison

Rooz Online: Announcing the Existence of an Official Anti-Baha’i Organization

Kayhan: Baha’i prisoners in Shiraz accused of publicity against the regime

Latest on 54 Baha’is arrested in Shiraz

Letter from Farough Izadinia to his trial judge

Shamsi Khadem pleads to Ayatollah Montazeri for release of her daughter, Molouk Khadem

Shamsi Khadem pleads to Assistant Prosecutor in Evin prison for release of her daughter, Molouk Khadem

Shamsi Khadem pleads to Assistant Prosecutor of Rajai Shahr for release of her daughter, Molouk Khadem

Shamsi Khadem asks for return of ownership documents of the house, the car and other belongings of her daughter

Shamsi Khadem pleads to the Supreme Judicial Council for the release of her daughter, Molouk Khadem

Shamsi Khadem, age 90, pleads for release of her daughter, Molouk Khadem from prison

Kayhan London newspaper: Baha’i prisoners not to be pardoned

Baha'is not included in amnesty of prisoners for Eid-e Ghorban

Shamsi Khadem pleads to Ayatollah Mousavi Ardabili to look into the case of her daughter, Molouk Khadem

Shamsi Khadem pleads to Hojjatol-Islam Rafsanjani for release of her daughter, Molouk Khadem from prison

Houman Shaydanshidi’s stories from visiting his father in prison

Shamsi Khadem asks for her daughter in prison, Molouk Khadem, to be treated in hospital for her eye condition

Rouhollah Bahramshahi’s letter to Assistant Prosecutor of Yazd: Allow me to visit my mother on her dying bed

Plea by Shamsi Khadem for the release of her daughter, Molouk Khadem

Shamsi Khadem pleads to be allowed to visit her daughters, Molouk and Touran Khadem in prison

Petition by colleagues to allow three imprisoned Baha'i doctors to be released.

Letter from Maryan Ghasemi to Director of Medical Council

Ferdows Akhavanus-Safa pleads to Revolutionary Prosecutor of Shiraz for the release of her daughter, Mitra Iravan

Court verdict on Habibollah Mohtadi should be carried out

Letter from the Baha’i community of Iran to Supreme Judiciary Council: Baha’is arrested in Hamadan should be treated fairly

Medical board of Mazandaran requests Rouhiyyeh Yazdani’s release from prison

Letter from the Baha’i community of Iran: Armed men have arrested members of the National Spiritual Assembly of Iran

Order to arrest Khosrow Izadyar and inspect his house

Letter from the Baha'i Community to Ayatollah Mousavi Ardabili

A group of dervishes arrested in Turkey, following the arrest of Baha’is

Report on incident in Abarghou

Innocent people arrested in relation to the incident in Abarghou

Report on death of a Baha’i prisoner in Yazd

Incident in Abadeh and arrest of several Muslims and Baha'is

Complaint to Prime Minister about prison sentence for Baha'i marriage

Letter from Nasrollah Shahrezaie to the cabinet of ministers: Authorities refuse to register my marriage

Letter from Asadollah Dousti-Najafabadi to the cabinet of ministers: Authorities refuse to register my marriage

Letter from Fatollah Zainabi to the cabinet of ministers: authorities refuse to register my marriage and have jailed me

Letter from Mohammad Vatani’s mother to the cabinet of ministers: authorities refuse to register my son’s marriage and have imprisoned him

Letter from Fatemeh Khamasi to the cabinet of ministers: Authorities refuse to register my marriage and have jailed my husband

What punishment for Baha’is in Sangsar who close their shops for the “Flower” festival?

Sangsar women appeal to authorities for the release of their relatives

13 days of in prison, without any crime

Demand for the release of 10 Baha’is, jailed for closing their businesses on Baha’i holiday

Expulsion of 5 Baha’is from Sangsar

Ostad Hosein, Babi prisoner in Mashhad, a shoe-maker from Kashan

Adilabad prison in Shiraz, where a number of Baha’is including 10 young girls were executed