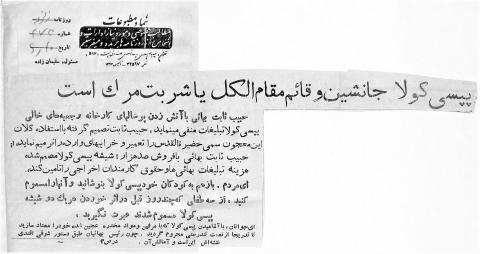 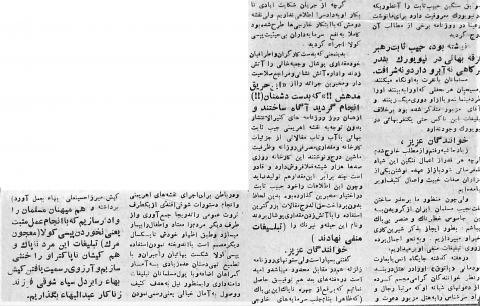 Is Pepsi Cola the Substitute For Alcohol or a Death Potion?

The Baha’i Habib Sabet negatively advertises [Pepsi Cola] by burning the factory trash and the empty Pepsi Cola cases. Habib Sabet has decided to repair and reconstruct the damaged Haziratu’l-Quds through the huge sale of this poisonous potion.

When the poisonous propaganda of the heretical and worthless Baha’i sect had intensified, and clerics, with the help of the Muslims, had removed the veils from detested and unstable Habib Sabet’s face―who one day becomes a Baha’i, another day a Jew, and sometimes a foreigner, is affiliated with their religion, paving their way by his secret propaganda and providing exaggerated statistics of the number of Baha’is in America and exaggerating the number of the political Baha’i group―one of the relatives of the editor of this newspaper, who has lived in New York for many years, wrote to us about Habib Sabet’s heavy record as he is known in New York, excerpts of which article were published in the newspaper. Muslims look at him with hatred, and Christians reject or shun him at any gathering or avoid him, and the above-mentioned person had written that, contrary to his propaganda, there is not a single Baha’i in New York.

…Last week, at the same time that I was writing the Pepsi Cola article, an informed person, who was fully aware of the capital flow and activity of the Pepsi Cola factory, while explaining the procedure of the preparation of Pepsi Cola that is mixed with brown sugar and ordinary water of street gutters, and each bottle does not cost more than ten cents, stated, “Habib Sabet has decided to end his previous and constant propaganda, and, following some European and American capitalists, begin to spread negative propaganda. He seems to have provoked some people to complain to the court about the bad taste of Pepsi Cola and the fraud of its operators, and then convey his acquittal and innocence to the simple, ordinary people in the cities with unparalleled noise. Also, with the help of his local and foreign agents, especially the Baha’is, he wants to deceive all the newspapers and magazines and force them to publish detailed articles in newspapers and magazines without paying a dime.

Zelzeleh newspaper: PEPSI is the enemy of Islam

Zelzeleh newspaper: Pepsi is a gift from Akka

Zelzeleh newspaper: Pepsi is poisonous and owned by Baha’is