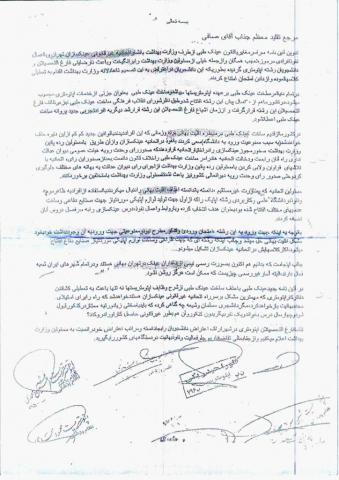 In our country, the manufacture of optical lenses has always been dominated by the minority Baha’is. When these individuals realized that new laws would soon eliminate them from this circle (due to their being prohibited from entering university), they tried to exert influence within the Opticians’ Union and, through the lower authorities in the Ministry of Health, they planned to give the union the power to issue licences for manufacturing of optical lenses. However, they were stopped due to the issuance of a unified judicial precedent by the Court of Administrative Justice Board, which considered interference of the union in the manufacture of optical lenses to be against the law. After this decision, the union made great efforts and lobbied the lower authorities of the Ministry of Health, using various excuses, to prevent the implementation of the decision of the Court of Administrative Justice. Even the issuance of judicial precedent by the Supreme Court did not cause the Ministry of Health authorities to confront the offenders.

The union authorities, indirectly, either knowingly or unknowingly, pursued the goals of the Baha’i minority. By using seemingly legitimate individuals and by influencing the University of Applied Science and Technology, they selected the optical field of study, which had been inaugurated, from the start, for producing optical tools needed in defence industries and for manufacturing various lenses, and through public relations and exerting influence, introduced the manufacture of optical lenses to the top of their curriculum.

As the criteria to enter this field of study did not require an Entrance Examination pass, and there was no prohibition against studying it, the Baha’i minority issue was automatically resolved. It is interesting that a field of study which is designed to manufacture optical tools required in defence industries conducts most of its classes in the Opticians’ Union and…

Interestingly enough, nowadays, officially half of optical wholesalers in Tehran are Baha’is and they have franchised branches in every city in Iran. Obviously, the unofficial statistics are something that may never be clear.

Removing the manufacture of optical lenses from the optometrists’ job description in the new optical lens regulation by-law will not only terminate optometry workplaces, which are the biggest hurdle in the way of the illegal Opticians’ Union, but will also open the way for renewed Baha’i domination. [How is it] a Muslim and Shiite student’s fault that he should pass the University Entrance Examination with great hardship and study for four years, and then someone else, without sitting for the Entrance Examination, should illegally reap the product of his hard work?

Therefore, we, the graduates of optometry in the City of Arak, acknowledge the students’ protest and announce our objection to the authorities in the Ministry of Health and we request Your Highness to stop the activity and influence of Baha’ism within this nation’s agencies.

Can Dr. Jalal Vahdati, who's been dismissed for being a Baha'i, be employed as technical manager of a Pharmacy in Yazd?

Dr. Tahereh Berijs says forcing Baha'i doctors to take their oath not in accordance with their faith is against professional principles