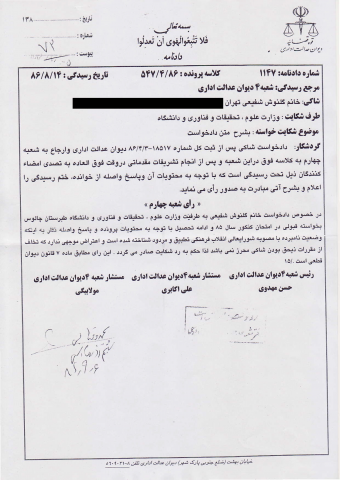 Follow not the lusts (of your hearts), lest ye swerve

Complaint against: Ministry of Science, Research and Technology and the University

Subject of complaint and claim:  As detailed in the text of the claim

Procedure:  The plaintiff’s claim, following its registration under number 18517–3 Tir 1386 [24 June 2007] with the Court of Administrative Justice and referral to the fourth branch, as referenced above in this branch, and after the initial procedures were carried out, has been examined in a special session under the supervision of the undersigned. Subsequent to a review of the file and receipt of the response of the defendant, the hearing was concluded and the following decision rendered.

((Ruling of the Fourth Branch))

With regard to the claim of Mrs. Golnoush Shafie that she passed the National University Entrance Examination in [academic year] 1385 [2006/2007] and should be permitted to continue her studies, and with the interests of the Ministry of Science, Research and Technology and the University of Tabarestan in Chalus in mind; after reviewing the contents of the file and the response received, owing to the fact that the situation of the claimant is covered by the provisions sanctioned by the Supreme Council of Cultural Revolution and there being no evidence that related regulations have been violated, the plaintiff has no grounds upon which to validate her request, which is therefore judged invalid.  This verdict is in accordance with Article 7 of the Court [of Administrative Justice] Act and is final. / 15

Head of the Fourth Branch of the Court of Administrative Justice