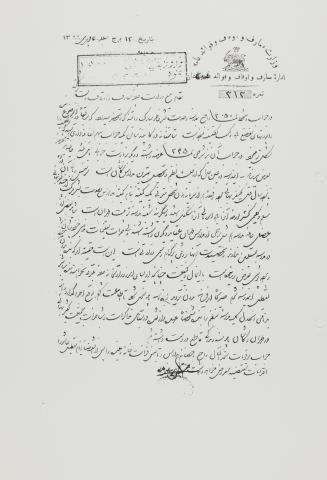 The Ministry of Education, Endowments and Philanthropy

The Office of Education, Endowments and Philanthropy

The Esteemed Position of the Honourable Ministry of Education and Endowments, may his glory be everlasting

In response to written note number 3050, regarding the Vahdat-e Bashar School, I hereby bring it to your blessed attention that I have previously provided extensive reports regarding this subject and have asked for clarifications regarding my responsibility. Unfortunately, in the previous cabinet we received a vague and complicated reply which made the responsibility more unclear. In response to that we submitted an explanation, number 245, and never had the privilege of receiving a response.

Now too, I briefly bring it to your attention: Fifteen years ago, the founder of this school, even though it is one of the best schools in Kashan as far as organization and education [are concerned], was a Baha’i; up to now, it has been running on the funds of the same person, who has since passed away. A committee, which is called the committee of the schools of Vahdat-e Bashar [Unity of Mankind], which consists of a few Baha’is, Muslims and Jewish people, [has] the financial responsibility for it, and they say it is a branch of the Tarbiat School of Tehran. Maybe some of the family members, as in some of the schools of Tehran, have different beliefs, but [they] would not dare share their religious teachings with their students and their education is according to the formal programme of the ministry. So this is the truth of the matter that I have brought to your attention without any hesitation or cover-up.

Nevertheless, if the heads of affairs of the esteemed ministry wish for me to arrange the closing down of this school, please advise explicitly that this school, undoubtedly, needs to close down, so that I can obey and carry out the order; otherwise I will not be carrying the bad reputation of dissolving an organized school when facing the negotiations and the arguments of the large population of the Baha’is of Tehran and Kashan with any decisive evidence or documents.

The reply to the letters sent regarding the statistics of the schools and the establishment of a reading class, and the others, will be sent after the completion of the Ashoura holy days, and [I] will inform you of the necessary steps taken.

Iranwire: BIHE; story of an unofficial but reputable university

The interrogator said, we don't let you go to university, simply because you are a Baha'i

Iranwire: Hardships and hopes of Kayvan Rahimian, a Baha’i teacher

Iranwire: Street art campaign in defence of Baha’is of Iran

Iranwire: Baha’is are arrested for teaching and studying at Baha’i Institute for Higher Education

Letter by a Baha'i student to imprisoned professors of Baha'i University

HRANA: Farhad Sedghi goes back to prison after furlough

HRANA: Anniversary of the raid on Baha’i university

HRANA: A number of Baha'is associated with the online university have been accused of acting against national interest

Everyone has the right to education

Two schools set up in Sangesar were closed down, as they had no license

Order to investigate reports that two Baha'i schools, for boys and girls, have been set up in Sangesar

Report on two primary schools, for boys and girls, set up by Baha'is in Sangesar

Closure of the Baha’i kindergarten in Najafabad

Report on schools in Kashan

Letter to an MP and the head of Kafshgar Kola school

Letter to Ministry of Education to close Kafshgar Kola school

Letter from Education Minister about the situation of Kafshgar Kola school

Letter from Badiollah Mesbah to the head of Women’s Education

Department of Education to decide about ‘Vahdat-e Bashar’ School

Telegram to Chief Minister about opening of Vahdat-e Bashar school

Letter from Ministry of Education about Vahdat Bashar school

Vahdat-e-Bashar School handed over to Department of Education

Letter from Molla Habibollah to Ministry of Interior

Demand for principal of Vahdat Bashar school to be dismissed