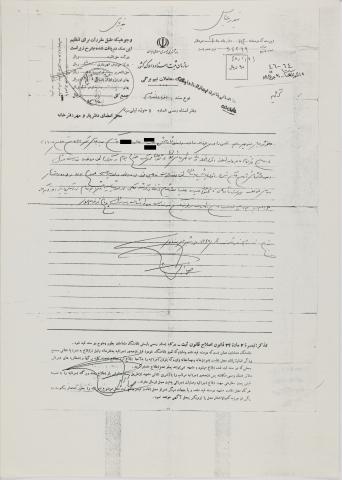 The funds received in accordance with the regulations for the preparation of this document is as follows:

All measures concerning this document was conducted before me on-------------

Manouchehr Zia Nakhaie-Ravari, son of Davoud, holder of birth certificate number [redacted], issued in [redacted], was present in this notary office. He stated, “For a while, because of being a Baha’i I was forbidden to open my shop. Presently, following the approval of the authorities in charge, it is possible for me to re-open the shop. It is acknowledged hereby that as a Baha'i, according to our religious convictions, we are prohibited from meddling in political matters, and we consider joining political parties that are against the regime an unforgivable transgression. As such, [illegible] I hereby declare that I have neither been a part of any political group in the past, nor will I be in the future. Should any written evidence to the contrary be brought to the attention of the authorities, I shall accept responsibility and will be accountable.

Note: Paragraph 3 of Article 34 of the Amended Laws to the Registration Act – In all official documents, the place of residence/address of the parties must be clearly stated.

The address of the involved party is stated in the document. As long as he does not inform the Registration Bureau, prior to the issuance of the executive order, and prior to the delivery of the communication, of any change of address, with proper details, including the house number (be it a house of guest house) for the order to be delivered, all written notices and communications will be delivered to the address stated in the document, and the individual cannot object to not having been informed.

All public notary offices are obliged, after the issuance of the executive notice, to notify the individual in question by registered post, and to send the executive order together with a copy of the receipt of the postal service, to the Registry Office of the locality for the notification of the order and the executive operations.

Where the place of residence of the individual in question is not stated in the document, or if the verification of the address is not possible for any other reason, the local Registry Office will publish one time a brief summary of the subject matter of the executive order in one of the widely circulated newspapers of the locality, or closest to it.