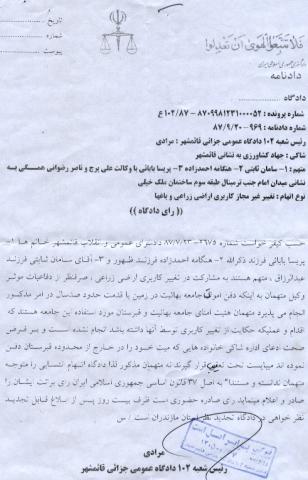 Charges: Illegal use and rezoning of farmland and orchards

According to bill of indictment number 2675 – 23 Mehr 1387 [14 October 2008], issued by the Public and Revolutionary Prosecutor’s Office in Qaemshahr, the accused, (1) Ms. Parisa Babaei, daughter of Zekrollah, (2) Ms. Hengameh Ahmadzadeh, daughter of Zohour and (3) Mr. Saman Sabeti, son of Abdol-Razzagh, are charged with involvement in the rezoning of farmland. Not withstanding the effective defense put forth by the counsel for the accused to the effect that the Baha’i community has been burying its dead in this land for a hundred years, the accused individuals are [members of] the governing body of the Baha’i community with respect to this cemetery and its use by the community, and there is no evidence to suggest that they have been involved in the rezoning of the land in question.  Even if the claims by the plaintiff were to have any merit, the families who buried their dead should have been prosecuted and not the accused. Therefore, the court finds the charges against the accused to be without merit, and, pursuant to Article 37 of the Constitution of the Islamic Republic of Iran, the charges are withdrawn and a verdict is issued accordingly.  This court order is issued in the presence of the parties concerned and may be appealed within 20 days at the Court of Appeals of Mazandaran province./S

Letter by Helen Misaghi: Bahai's in Tabriz have not been allowed, in the past five years, to bury their dead

Request to obtain a plot of land for cemetery in Isfahan

Permission to build cemetery in Shahr-e-Rey