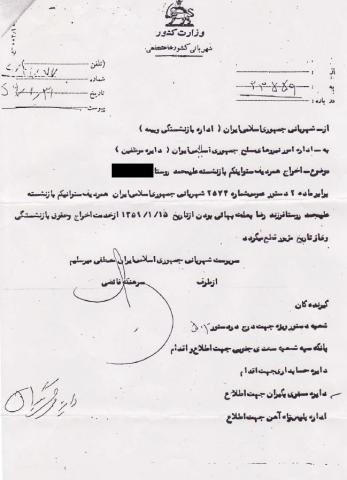 From:  Police Force of the Islamic Republic of Iran (Office of Retirement and Insurance)

To:  Office of Armed Forces Affairs of the Islamic Republic of Iran (Personnel Office)

In accordance with Article 2 of General Order Number 2574 of the Police Force of the Islamic Republic of Iran, civil [employee] Ali-Mohammad Roosta, son of Reza, equivalent to First Lieutenant, has been dismissed from his employment owing to his being a Baha’i, effective 15 Farvardin 1359 [4 April 1980], and his retirement pension will be discontinued from the aforementioned date.

Director of Police of the Islamic Republic of Iran, Mostafa Mirsalim

On behalf of Colonel Faezi [signature]