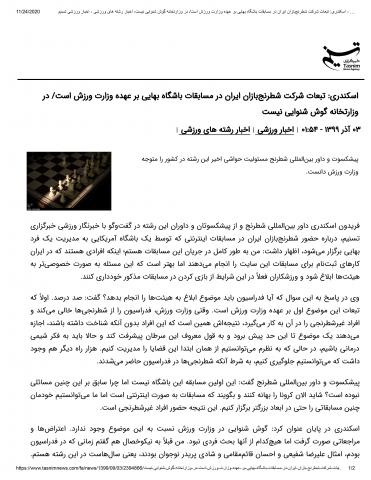 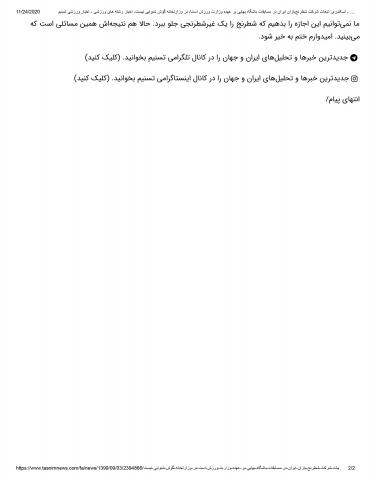 Eskandari: The Consequences of Iranian Chess Players’ Participating in the Baha’i Club Competitions are the responsibility of the Ministry of Sports / There is No Hearing Ear in the Ministry

The international chess veteran and referee blamed the Ministry of Sports for the recent rumours of the sport in the country.

In an interview with a sports reporter of Tasnim News Agency about the presence of Iranian chess players in online tournaments organized by an American club managed by a Baha’i, Fereidoun Eskandari, an international chess referee and one of the veterans and referees in this field, said, “I am fully aware of these competitions; that there are people in Iran who carry out the registration for the competitions on this site, but it is better that this issue be communicated to the delegations privately, and under the current conditions, the athletes should refrain from playing in the aforementioned competitions.”

In response to the question as to whether the federation is responsible for notifying the delegations, he said, “Of course, 100 per cent. First of all, the consequence of this issue is the responsibility of the Ministry of Sports. When the Ministry of Sports discharges the federation of chess experts and uses non-chess players, the result is that such people, without knowing, allow the matter to go this far; in other words, they allow the cancer to grow to the point that now we have to think of chemotherapy. In my opinion, we could have managed these cases right from the very beginning. There were also 1,000 other ways that we could have prevented this, provided that chess experts were present in the federation.”

This veteran international chess referee said, “This is not the first match of the club. Why have such issues not arisen before? Perhaps, now, they might use the coronavirus as an excuse and say that the tournaments are online; but we could have organized such matches even in larger dimensions. This is the result of the presence of non-chess players.”

At the end, Eskandari stated, “There is no hearing ear at the Ministry of Sports regarding this issue. There were protests and appeals, but none of them were about an individual person. Previously, I told Nikoukhesal that when I was in the federation, people like Ali-Reza Shafie, Ehsan Ghaem-Maghami and Shadi Paridar were teenagers; this means that I have been in this business for many years. We cannot allow chess to progress through non-chess players. The result is what you see now. I hope the matter ends up nicely.”