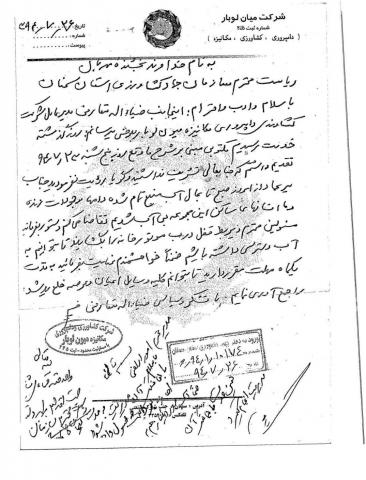 In the Name of God, the Forgiver, the Merciful

Respectable Head of the Department of Agriculture Jihad for the Province of Semnan,

Greetings and with respect I, Ziaollah Motearefi, the General Manager of the Agricultural, Mechanized Animal Husbandry, agro-industrial company of Miyan Lubar, hereby submit that I came to meet with you yesterday and brought along a letter describing the events of Thursday 23 Mehr 1394 [15 October 2015], but unfortunately you were not present, and apparently you have not read that letter. Mr Mir-Emad:  from this morning until now, the water-tank has remained empty. Our cattle--living animals-- and the humans dwelling on this farm have remained without water. I beg you to order the respectable relevant responsible persons to unlock the door of the engine-room, for us to be able to obtain consumable water. Also I request you to kindly give us a month of respite [grace] for us to be able to collect the equipment needed for the improvements to be made to the land [and buildings].

With thanks and appreciation,

[Official Stamp with number and date]

Received at the Agricultural Jihad Office of the Province of Semnan

[Handwritten Note at the end of the page]

Legal Office, Mr [Sana], for action in accordance with the Order

Respectable Head of the Organization

[Handwritten Note at the end of the page]

Letter of appreciation to Ziaollah Motearefi, manager of farming complex in Semnan