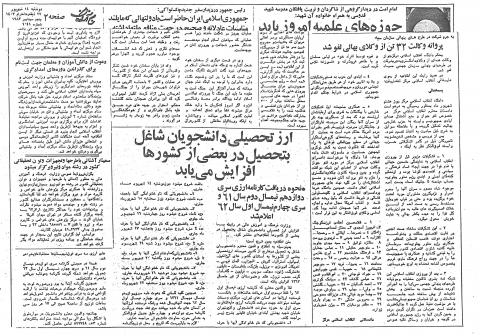 The law practice permits of several judiciary lawyers were cancelled due to their participation in the secret plans of the hellish CIA organization. In this regard, the following announcement was published by the public prosecutor of the Islamic Revolutionary Court,

The Central Office of the Islamic Revolutionary Court of Justice was convened on 8 Shahrivar [30 August] to review the request of the honourable Islamic Revolutionary Prosecutor of the Centre regarding the cancellation of the law practice permits and prohibition of practices of a number of the Zionist elements affiliated with the foreign party of Baha’ism; following the review of the content of the case, it made the following decision.

Following the accretion of membership of the individuals mentioned below to the administrative rank of the aforementioned party [Baha’ism], and considering that:

the Court has agreed with the request of the Central Office of the Public Prosecutor of the Islamic Revolution regarding the cancelation of the permit of law practices of a few members of this network, and hereby compels [Iran’s] Bar Association to cancel their law practice permits, and announces that they are prohibited from practicing within all [judicial] organs of the Islamic Republic. Also, as a religious duty, the Court commands the Office of the Public Prosecutor of the Islamic Revolution and all the relevant judicial authorities, not to allow these corrupt roots and American tail [connections] to continue their malice. The names of the above-mentioned lawyers are as follows:

Central Office of Public Prosecutor of the Islamic Revolution

Naim Aghdasi not qualified to engage in grocery distribution