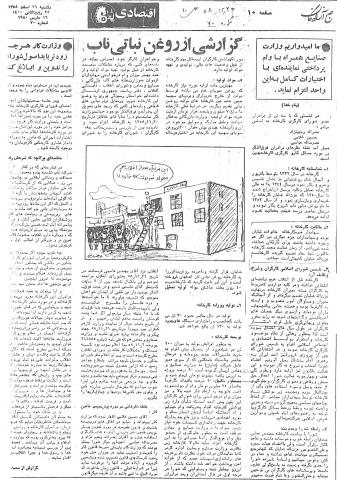 A Report on Pure Vegetable Oil

A meeting was held with three fellow members of the Labour Council, the brothers named Nasrollah Rahimnejad, Hossein Gholami, and Nosratollah Abbasi. The viewpoints of the brothers on work and labour issues are as follows: ...

The main shareholder of the factory is the Shayan family, and if there are any other minor shareholders, they are not known to the workers. Since the factory resumed activities, the only decision-making authority of the factory has been Ezzatollah Shayan, who is a Baha’i.

3. The establishment of the Workers’ Islamic Council and details of its responsibilities:

Before the Revolution, the factory did not have an elected representative; the factory managers, and ultimately [Mr.] Ezzatollah Shayan, would make all the decisions that were related to the workers. Since the managers and administrators were appointed by and connected to the employer, [and] have always protected the interests of the shareholders, and on the other hand, since the strong tendency [has arisen] towards the detested Pahlavi regime and Bahaism, [they] have [displayed] the strong characteristics of imperialism and exploitation of the workers during the years of repression,  therefore, [in order] to break free from the existing patterns within the factory, and to establish the Islamic social and economic relationships, we have taken action to establish the “The Council of Workers” in the factory. By the elections that we held after the proud victory of the Iranian nation, under the leadership of the iconoclastic imam, the members of the Council were elected and started their activities, which still continue.