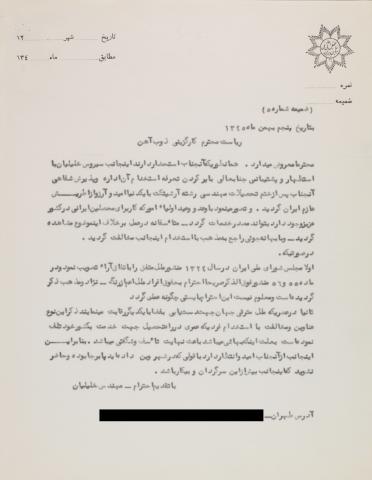 The National Spiritual Assembly of the Baha’is of Iran

I respectfully submit that, as you are aware, I, the undersigned, Sirous Khalilian, with your knowledge and support, completed the application form for employment at this plant, and with your verbal approval, after completing my engineering degree in architecture, and with a hopeful heart, I left Austria for Iran. Despite promises and assurances from the authorities concerning the availability of work for graduate students in Iran, my experience has proven otherwise, as my employment was denied based on my religious beliefs.

Whereas, firstly, the National Consultative Assembly of Iran unanimously adopted the United Nations’ Declaration in 1324 [1945], Articles 55 and 56 of which explicitly address the rights of all peoples regardless of colour, race and religion:  How do you imagine that these rights should actually be preserved?

Secondly, in an era when developed countries are competing with each other for discoveries in outer space, it is deeply regrettable to observe discrimination against the employment of an individual who has dedicated a lifetime to education in the hope of serving his country, and to be denied employment on the grounds of his religious beliefs.

I therefore count on you to honour the promise you made to me in Vienna so that I will not spend my days in a state of limbo and unemployed.