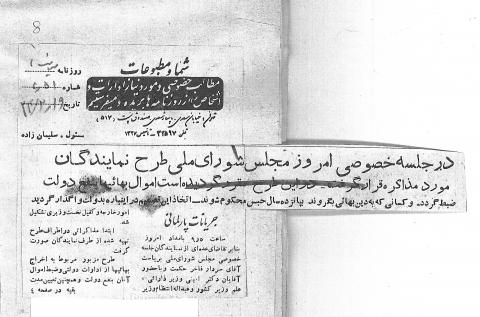 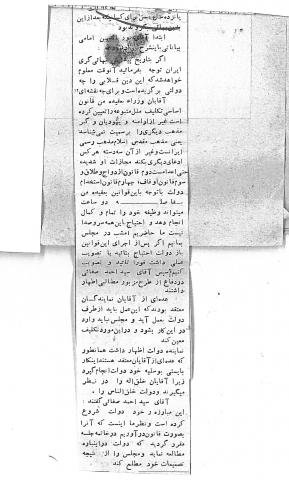 In a closed session of the parliament, its members introduced a bill for discussion.  The bill seeks to confiscate the property of the Baha’is in favour of the state, and people who become followers of the Baha’i Faith would be sentenced to fifteen years’ imprisonment—the final decision is left to the prime minister and his cabinet.

The above-mentioned bill is concerned with the expulsion of Baha’is from government service, confiscation of their properties in favour of the state, and fifteen years’ imprisonment as punishment for anyone joining the Baha’i Faith henceforward.

First, Mr. Nureddin Emami spoke these words: “If we look at the history of the appearance of Baha’ism, it will become evident that [foreign] governments chose this fake religion, and for what purpose?

“Honourable ministers, in my opinion, the constitution has clearly stated the rights of [Iran’s] minority groups.  It does not recognize any group except the Armenians [Christians], Jews, and Zoroastrians. This means that the holy Islam is Iran’s state religion, and anyone [who] claims [adherence to] other than these three groups [of religions] will be faced with severe punishment and even execution.  Second [to consider] is the law of marriage and divorce, third is the law of endowment, and fourth is the government employment laws.  In my view, we can fulfil our responsibility completely within two hours by paying attention to these laws, and there is no need to make such noise. We are prepared to stay in the parliament building, so that after approving the bill, should the cabinet need our further confirmation, we [can] immediately approve.”

Then Mr. Seyyed Ahmad Safaie spoke in defence of the bill.

…Mr. Seyyed Ahmad Safaie said, “The government [itself] started the struggle, and it is our opinion [that is should be made] a law. At the end of the meeting, it was decided that the cabinet would further study the matter and inform the parliament of the results of its decision.