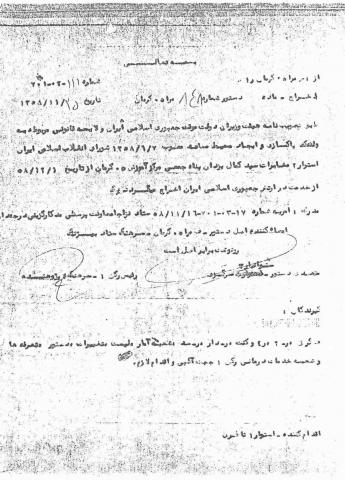 According to the Order in Council of Ministers of the Provisional Government of the Islamic Republic of Iran and the legal bill regarding purging and purification and establishing an [acceptable] environment, decreed on 7 Shahrivar 1358 [29 August 1979] by the Islamic Revolutionary Council of Iran, Major II of Communication Seyyed Kamal Yazdanpanah, [from] the Collective Education Centre 05 of Kerman, will be expelled from army services of the Islamic Republic of Iran, effective 1 Esfand 1358 [20 February 1980]. /G

Transcript is identical to the original

Head of the Pillar 1

Recipients: [illegible], 2 [illegible] 4 and [illegible], Statistics branch, List of changes, Order, Prices and Branch of Health Services of Base 1

For information and necessary actions

[Handwritten note number at the top of the page]

Kamal Yazdanpanah’s letter about his beliefs

Kamal Yazdanpanah no longer has a position in ThyssenKrup