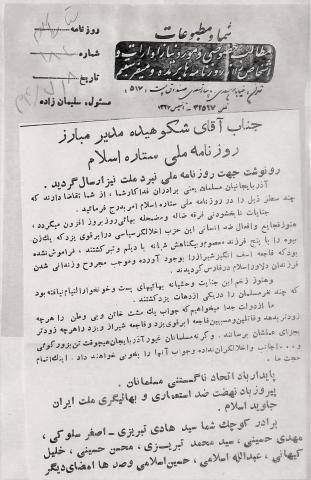 Mr. Shokoohideh, the warrior manager of the national newspaper of Setareh Eslam

The copy was also sent to Nabard-e Mellat national newspaper

Your sacrificing brothers, the Azerbaijani Muslims, request you to publish the following lines in the national newspaper of Setareh Eslam.

The unforgivable crimes of the perverse and decaying Baha’i sect are increasing day by day. The inhumane acts of this disruptive political party, which killed a widow and her five children with    crowbar and axe at night in Abarghou [Abarkuh] in Yazd, were not forgotten when they caused the unfortunate disaster of injury and imprisonment of the brave children of Islam in Shiraz, Fars [province].

The wounds of the brutal crimes of these abased and bloodthirsty Baha’is were not yet healed when they killed a few Muslims in one of the villages of Yazd.

We are seriously asking the government to deal with this handful of traitors and stateless people immediately, and punish the murderers and responsible individuals for the calamities in Abarghou in Yazd and the disasters in Shiraz and Yazd. Otherwise, the zealous Muslims of Azerbaijan will never accept tyranny from aliens and disruptors and will take it upon themselves to respond. This is our ultimatum.

Victory be upon the movement of anti-colonialism and Baha’ism in the nation of Iran!