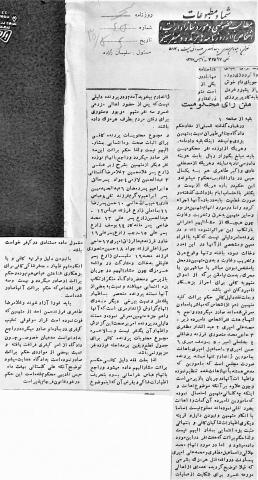 The Verdict of the Defendants of the Killing of Baha’is

In the last issue, a part of the provisions of the verdict of the Tehran Criminal Court against the defendants from Yazd was published, and now we publish the rest of the judgment:

Each of the nineteen convicts must pay the amount of one thousand rials for the court costs, and Mostafa Nadi and Akbar Taheri will be also sentenced to one year in the prison. This sentence should be applied to each of the 21 people, taking into account the days of previous detention, if they are certain.

However, in the case of the aforementioned accused and the others accused of arson, vandalism and looting, since none of the defendants has confessed to committing these crimes, and there is no evidence in the case file that all or certain individuals amongst them were involved in these matters; and the mere occurrence of arson, destruction and looting without the accused’s [being] on the spot; and uncertainty about the culprit/culprits or instigators; and the absence of evidence of the looted properties; there is not sufficient evidence to condemn the aforementioned; [therefore], a verdict of acquittal will be issued for all the defendants, including persons who have been introduced as the leaders of the culprits or their deputies.

And regarding the accusation of the following seven people: 1. Mohammad-Ali Amiri; 2. Abdolghaffar Mozaffari; 3. Haji Mohammad Mansouri, son of Reza-Gholi; 4. Bakhshali Amiri; 5. Yousef Miri; 6. Hasan Amiri; and 7. Esmail Amiri, for insulting the gendarme officers, the only evidence in the case file is the statements that the officers who claim to have been insulted have prepared, and their statements are under investigation. In addition to the subject of the insult, since it is not clear what words the defendants used that those officers considered insulting, basically, with the denial of the accused and the absence of any other evidence or similar document, the mere statements of the plaintiffs are not sufficient, and the crime attributed to those accused [is not proven]; therefore, the verdict of acquittal is given to seven people in this case.

As for the accusation against Mohammad Jalali, Esmail Mozaffari and Mohammad-Ali Amiri, [that they were] assistants in the Hormozak murder, as explained earlier, a number of the residents of Khosrow’s farm came to Shakhvid to complain about the gendarmes’ operation, and there is no evidence in the case file that after the presence of the residents of Khosrow’s farm, the three defendants ordered the people to go to Hormozak. The contents of the case file are not enough to prove the veracity of the crime attributed to them, and therefore the acquittal of these three people will be issued.

Regarding the accusation of the other nineteen defendants as stated in the following:

for the involvement and participation in the Hormozak incident, the said individuals, during the interrogation and in the court hearing, denied committing a misdemeanor/attributive crime, and in relation to some of them, the document of the case is limited to the statement of one person, and in the others involved in the case, the evidence of the accusation is limited to the gendarmerie’s report introducing them as the accused, and the document in the case is not a proof of the accuracy of this report and its statement by one person, and finally, the total contents of the case are not enough to obtain certainty regarding the intervention of these said 19 people.

Therefore, due to the lack of sufficient evidence, the aforementioned persons were acquitted, and Abbas Khorasani was charged with falsifying the plaintiff’s statements and assuming that this matter was included in the citation article in the indictment. In the absence of sufficient evidence, and with the denial of the accused, Jafar Shaki’s statement was not sufficient proof to convict Abbas [Khorasani] either; the acquittal order is issued and the 23 people who are acquitted must be released immediately. An order of suspension from prosecution will be issued against Gholam-Reza Taheri, the son of Hasan Ahad, one of the accused, who has died.

Regarding the claim of the private plaintiffs, since the court has halted the criminal case and has acquitted some people of the criminal [charges], it will be referred to the court.

To conclude, Ali Golestani was sentenced to seven months of disciplinary imprisonment. This sentence is final in the law itself.