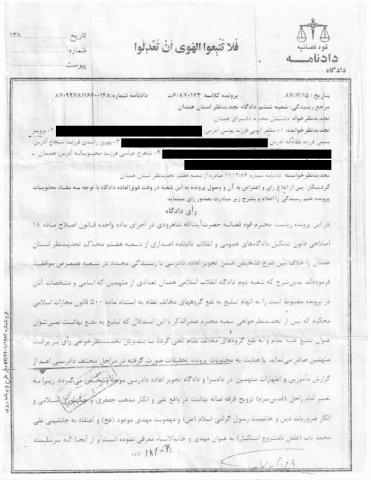 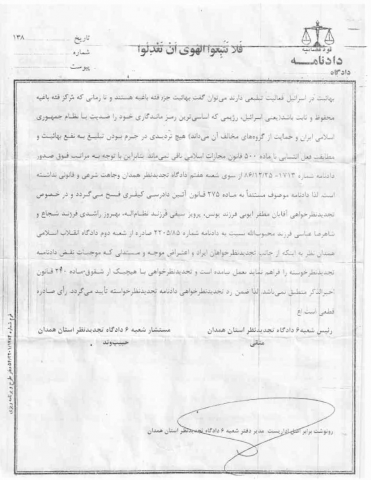 Do not follow your own desires, lest you deviate [Quran 4:135]

Administered by: Branch 6 of the Court of Appeals, Hamadan Province

Procedural synopsis: Following issuance of the court ruling, the subsequent appeal and the case having been referred to this Branch, in a special session and with due consideration to the contents of the case file, the Court announces the completion of the investigation and issues the following ruling.

In this case and in execution of the Single-Clause Article of Amended Article 18 of the Public and Revolutionary Courts Procedures Reform Act, the Head of the Judiciary, the Honourable Ayatollah Shahroudi has identified the decision issued by Branch 7 of the Courts of Appeal of Hamadan Province as an “obvious contradiction of Sharia law”, and while returning the file and recommending that the case be re-heard at an equivalent Branch, [he] has advised that Branch 2 of the Islamic Revolutionary Court of Hamadan convicted a number of the defendants, whose names and particulars are recorded in the file, on the accusation of having engaged in propaganda in favour of anti-regime groups, and citing article 500 of the Islamic Penal Code, which following an appeal, the esteemed Branch identified above [7], upheld the appeal and found the defendants not guilty based on grounds that propaganda for Baha’ism cannot be interpreted as propaganda against the Regime and in favour of anti-regime groups [and] with due consideration to the contents of the file and the investigation undertaken at various stages and including the reports from the investigating agents and the statements of the defendants at the Prosecutor’s Office and in Court, returning the file for re-hearing is considered justifiable.  The reason is that, based on the interpretation of the deceased Imam [Khomeini] God Bless his Soul, promoting the perverse Baha’i Sect is in fact identified as the negation and denial of the Jafari [Shia] religion, the Islamic Republic, as well as a denial of the necessary principals of religion, Khatamiat of the esteemed prophet of Islam, Mahdaviat of the promised [Imam] Mahdi and belief in ‘Ali Muḥammad Báb (the illegitimate child of arrogance) as a substitute for Mahdi and Khatamol-Anbia.  And owing to the fact that the head of Baha’ism conducts propaganda activities in Israel, Baha’ism can be considered as a part of the “Rebellious Group”, and so long as “Rebellious Group” is secure and stable [in] (meaning Israel, a regime which finds the opposition to the Islamic Republic of Iran and support of groups against it as its fundamental tool for its sustainability), no doubt remains concerning the criminality of “propaganda in favour of Baha’ism” and it is in conformity with the provisions of the charges referred to in Article 500 of the Islamic Penal Code.

Consequently, with due consideration of the above mentioned matters, the issuance of decision number 1713 of 25 Esfand 1386 [15 March 2008] by Branch 7 of Hamadan’s Appeals Court does not have religious or legal credibility.  Therefore, the aforementioned decision is revoked pursuant to Article 275 of the Criminal Procedure Regulation.  With regard to the appeals of Messrs. Mozaffar Ayyoubi, son of Younes, Parviz Seifi, son of Nezamollah, Behrouz Rashedi, son of Shoja and Shahreza Abbasi, son of Mahboubollah concerning Judgment number 2205/85 issued by Branch 2 of Hamadan’s Islamic Revolutionary Court, since no credible and reasonable objection has been offered by the Appellants [the Baha’is] which can void the [original] Judgment, therefore the [initial] request for appeal does not comply with any provisions of Article 240 of the mentioned regulation, while the appeal application [on the first instance] of the original Judgment is denied, the appeal [in this proceedings] is upheld.  The issued judgment is final.

Head, Branch 6 of the Court of Appeals, Hamadan Province

Advisor, Branch 6 of the Court of Appeals, Hamadan Province

Copy is the same as the office original, director of the office of Branch 6 of the Court of Appeals of Hamadan Province [Signature]

[Handwritten note at the bottom of first page]

[Stamp at the bottom of first page]

[Stamp in the centre of first page]