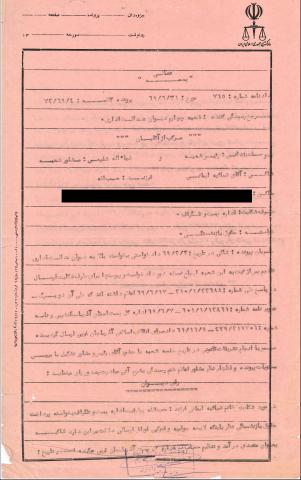 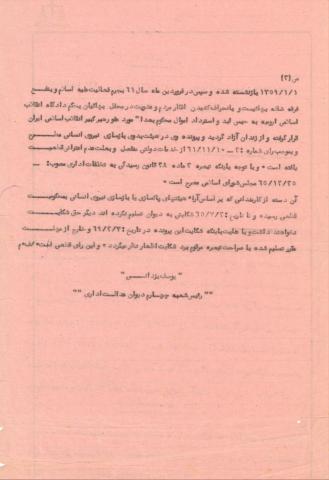 Justice Administration of the Islamic Republic of Iran

Investigating Authority: Branch 4 of the Court of Administrative Justice

Procedural Synopsis: On 3Ordibehesht 1369 [23 April 1990] the applicant lodged an application regarding the above claim to the Court of Administrative Justice. After being registered in this Branch, the second copy of the application and its attachments were referred to the defendant, who, in turn, sent the response by way of letter number 210/1/22688 of 17 Shahrivar 1369 [8 September 1990], and submitted [with that letter] two pages, facsimile number 601/1/12861 of 7 Shahrivar 1369 [29 August 1990] of the Central Post Office of the Province of Western Azerbaijan and letter number 439/219706 of 9 Bahman 1361 [29 January 1983] from the Islamic Revolution Prosecutor’s Office of Western Azerbaijan. During the formal legal procedure on the date of the meeting at this Branch, and with the presence of the head of the Branch and the legal counsel consultant, the review of the contents of the files took place, and the views of the legal counsel were heard. The conclusion of the hearing was declared and the final decision is delivered as follows:

Concerning the application of Mrs. Ziaiyyeh Imani, daughter of Hobbollah, and the [statements of the] defendant, the Post and Telegraph Office, and the claim for [payment of] retirement pension, because the statement of defence and the attached documents state that the applicant was in charge of finances and accounting at the Central Post Office of Western Azerbaijan, and on 1 Farvardin 1359 [21 March 1980] she retired, and later, in Farvardin 1361 [March 1982], was convicted of having activities against Islam and in favour of the perverse Baha’i sect, [causing deviation of] public opinion, and membership in the Baha’i Assembly, by the order of the Islamic Revolutionary Court [the applicant] was sentenced to life imprisonment and [confiscation of her] properties.  She later received a pardon from the great leader of the Islamic Revolution of Iran and was freed from prison.  Her case was discussed at the Preliminary Commission for the Restructuring of Human Resources, and according to decision number 2 of 10 Bahman 1361 [30 January 1983] she was dismissed from government employment. Because she did not appeal, the subject had become finalised. According to Note 2 of Article 28 of the Investigation of Employment Offences Act, ratified on 25 Esfand 1365 [16 March 1987] by the Islamic Consultative Assembly, it is clear that:

Those employees who, according to the decisions of the Commission for purging or Restructuring of Human Resources, have been permanently convicted and have not presented any complaint to the Court up to 2Mehr 1365 [24 September 1986], have no more right to reopen their cases. Given that this application was lodged on 3 Ordibehesht 1369 [23 April 1990], and it is outside of the clearly stipulated limitation period, the complaint is hereby declined with reference to the aforementioned Note. This decision is final.

Manager of Branch 4 of the Court of Administrative Justice