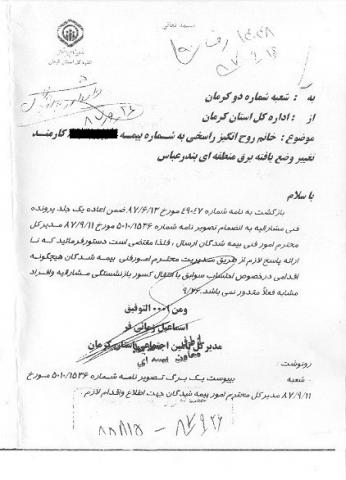 To: Branch 2 of Kerman

You are requested to instruct that until a comprehensive response is received from the esteemed Director General of Technical Affairs for the Insured, no transaction(s) should proceed with respect to calculation of funds owed, or the transfer of a pension, to the forenamed or similar individuals.

Branch -- Enclosed:  One page facsimile of letter number 5010/1536, dated 11 Azar 1387 [1 December 2008], of the esteemed Director General of the Technical Affairs of the Insured, for information and action as requested

[official stamp with number and date]

[handwritten note number at the top of the page]