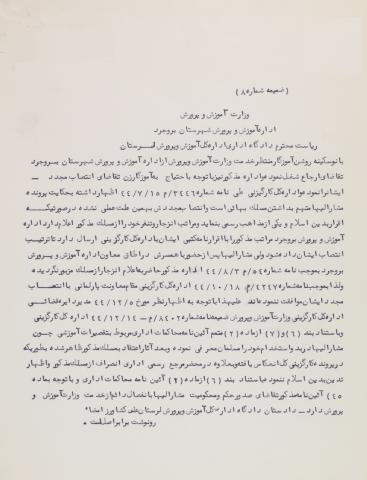 Mrs. Sakineh Rowshan, a teacher suspended by the Ministry of Education, has requested the Department of Education of Borujerd County for permission to return to work. This department has, in turn, requested her reinstatement, given the need for female teachers.

In letter number 3446/M, [dated] 15 Tir 1344 [6 July 1965], the Personnel Department stated that according to her file, she was accused of being a Baha’i; hence, her reinstatement was not possible unless [she] declared [herself] to be Muslim or an adherent of another officially recognized religion, and expressed in writing to the Personnel Office her disgust and hatred [for] the stated ideology, in which case she could be reinstated.

The above-named then came to the Department of Education of Borujerd with her husband, and, as indicated in letter number 54/M, [dated] 3 Aban 1344 [25 October 1965], from this office, refused to express disgust and hatred for the stated ideology. Therefore, as per letter number 4247/M, [dated] 18 Dey 1344 [8 January 1966], from the Personnel Department, the parliamentary deputy refused her reinstatement.

There are further reasons for this decision. The views of the director of judicial affairs of the Employment Department at the Head Office of the Ministry of Education, dated 5 Esfand 1344 [24 February 1966], are expressed in letter number 8402/M, [dated] 14 Esfand 1344 [5 March 1966], of the Employment Department Head Office, and [are] also in accordance with Sections (6) and (7) of Article (2) of the Supplement to the Procedural Guidelines for Administrative Tribunals concerning educational offenses. The offenses include her presenting herself as a Muslim at the beginning of her employment, but having later demonstrated adherence to the above-mentioned ideology, which is reflected in her employment records. Moreover, she refused to renounce her ideology before the administrative authority and accept Islam, pursuant to Section (6) of Article (2) of the Procedural Guidelines for Administrative Tribunals, and in light of Article (45) of said guidelines. We therefore request issuance of her permanent termination from service within the Ministry of Education.

Prosecutor, Administrative Tribunal of the Department of Education, Lorestan,