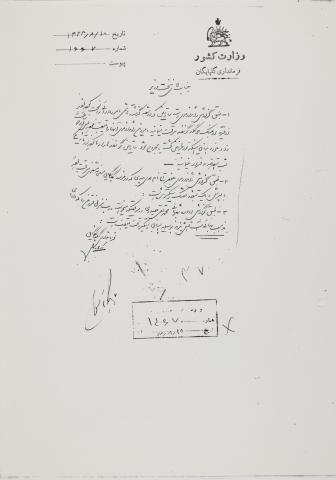 1- According to the police report, the group of thieves who had robbed Hashemi, an officer of the Treasury, last week, stole two herds of sheep from Arjank Village. The police officers chased them, and after two hours of fighting, and without anyone getting killed or injured, the thieves finally released the sheep, and, taking advantage of the darkness of the night, ran away.

2- According to the police report, Jaffar Gholi Lybidi, who has been committing armed robbery in the Golpayegan area, has been arrested with a gun, together with his son.

3- According to the police report, Mohammad Taghi Heidari was arrested by the police, while he was trying to set fire to the front door of Mr. Foroutan, who is a Baha’i, and is now being prosecuted.

The Governor of Golpayegan, [Signature]

[Handwritten note 2:]  To be filed