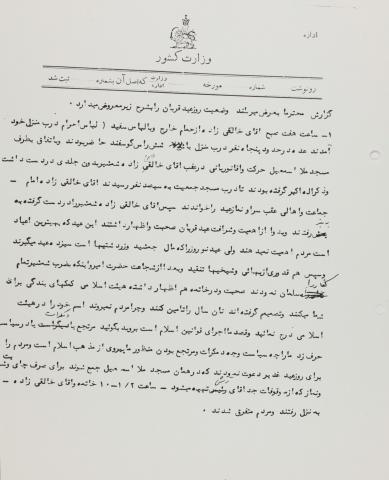 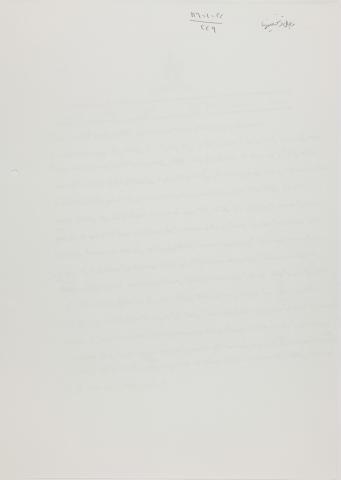 [Copy of a Report of Yazd, Without Number or Date: Possibly Mehr 1327]

Report: I would cordially describe the circumstances surrounding Eid-al Adha as follows:

At 7:00 in the morning, Mr. Khaleghizadeh [Khalesizadeh] left the public bath and came out of his house wearing his white pilgrim’s garb. A group of people, having six sheep with them, were ready outside his house. They all accompanied him and went towards the Mulla Esmail mosque. Behind him, Mr. Nouriani, holding an unsheathed sword, was walking and crying out “Allah’u-Akbar” [God is the Greatest of All].

When they all arrived at the mosque, the crowd consisted of three hundred people. The congregation said prayers behind Mr. Khaleghizadeh [Khalesizadeh]. Then he took the sword, went behind [the pulpit] and began his sermon by praising Eid-al Adha and talking about its importance and merits. He said that this was the best of all Eids [festivals], but people do not pay attention and celebrate Naw-Ruz, which belongs to Jamshid and Zoroastrians for thirteen days.

Then he criticized the Baha’is and Sheikhis, and after that he spoke about the courage of Imam Amir [Imam Ali], who forced the infidels to accept Islam, with the force of the sword.

Towards the end, he said, “Muslim Society serves the people and provides your bread for one year. Why don’t you go and register your names with the society? Our purpose is to implement the Islamic law. Go and say that he is ertejaei [reactionary], or belongs to other one [Democrat] and speaks about politics. I do not have anything to do with politics, Democrats or reactionaries. What I am interested in is obeying Islam. Then he invited everyone to come for Eid-al Ghadeer to the same mosque of Mulla Esmail to have tea, syrup and prayers, which will be prepared [for all] by the contributions of the grandfather of Mr. [illegible].

At 10:30 a.m., it ended; Mr. Khaleghizadeh left for his home and people dispersed.