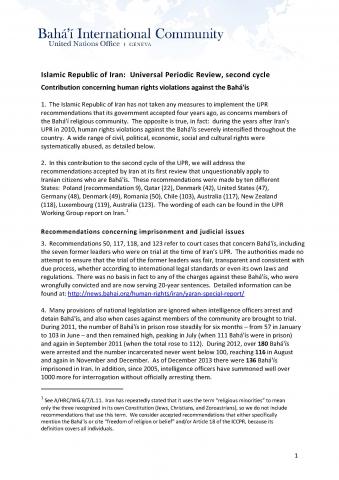 1 See A/HRC/WG.6/7/L.11. Iran has repeatedly stated that it uses the term “religious minorities” to mean only the three recognized in its own Constitution (Jews, Christians, and Zoroastrians), so we do not include recommendations that use this term. We consider accepted recommendations that either specifically mention the Bahá'ís or cite “freedom of religion or belief” and/or Article 18 of the ICCPR, because its definition covers all individuals.

continued to be singled out for treatment inconsistent, not only with international law, but also with the legal standards normally applied to Iranian citizens.

Incitement to hatred and violence

Other discriminatory policies and  practices

Regarding the right to education:

education in Iran as long as they did not abandon their faith and declare that they are Muslims.

Right to employment and livelihood

provisions.2  Unfortunately, in its present stage, the Charter represents an effort by the

government of Iran to convey the impression that it is now committed to upholding the rights of its country's citizens. However, it continues to treat particular segments of the population as being outside the framework of constitutional protection and the various covenants on human rights to which Iran is a party.

2Vice-President for Legal Affairs with the assistance of he Presidential Centre for Strategic Studies, First Draft Charter of Citizenship Rights, 26 November 2013 available at http://www.president.ir/att/shahrvandi.pdf.Web 10 January 2013

HRANA: More pressure on Baha’is; refusing to provide national ID cards to them

HRANA: Violations of human rights of Baha’is in Esfand 1391

HRANA: Calendar of violations of the rights of Baha’is in Iran, June/July 2010