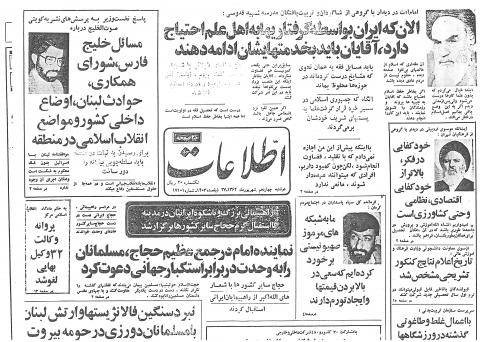 By the order of the Central Islamic Revolutionary Court, the practicing licences of a group of lawyers of the Justice Administration, accused of participation in secret plots of the hellish organization of the CIA, were cancelled.

Along the same lines, the following announcement on behalf of the Central Islamic Revolution Public Prosecutor’s Office was published:

The Central Islamic Revolutionary Court, on 8 Shahrivar [30 August], in order to attend to the request of the esteemed public prosecutor of the Central Islamic Revolution, with regard to the cancellation of the practicing licences in a group of Zionist hands, pertaining to the foreign Baha’i party, and in consideration of their antecedents, has decided the following.

After investigation and identification of the membership of the individuals mentioned below in the administration pertaining to the above mentioned party, it is understood that:

Therefore, the Court has agreed with the request of the central public prosecutor of the Islamic Revolution in relation to the cancellation of the practicing licences of the lawyers of a group of the members of this network, and consequently, through the lawyer of the Justice Administration, has been convinced to cancel their practicing licences and has announced their ban from employment in all the structures of the Islamic Republic.

Also, the Court, legally, over the Islamic Revolution public prosecutor and all the justice officials and those related to [them], came to realize that these corrupt and sinful roots of America should not be given consent and permission to continue their evil acts.

The names of the mentioned lawyers are as follows:

Iranwire: Expulsion and forced migration deprived Iran from the services of Baha’i physicians

Naim Aghdasi not qualified to engage in grocery distribution

HRANA: Increased economic pressure on Baha’is of Kerman and Rafsanjan

Baha'i employees of Mina Glass Manufacturing summoned to be dismissed

Do not rule in favour of Baha’i employees

Keyhan newspaper: 49 purgd in Ministry of Education in Semnan

Dismissed from work at National Radio and TV

To be dismissed from work at Machine Sazi Arak