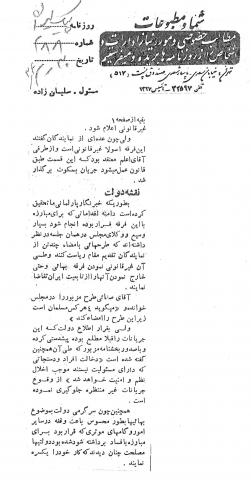 At the Extraordinary Session of the Cabinet

On Tuesday morning, the members of parliament from here and there had gathered and were discussing current affairs. Shoushtari, Seyyed Ahmad Safaei, Pir Rasteh [Pirasteh] and Amidi Noori were boasting about their extreme devotion [prejudice] to Islam to the members that were called to the private meeting...

…In the private meeting of Tuesday, Shoushtari insisted that the gentlemen be frank...clearly say Baha’i sect and Bahaism...

But [Mr.] Alam, the minister of the interior, said in response to Shoushtari, “The referent of the circular, by itself, is the said sect, and besides, the officers of the Ministry of the Interior are fully aware of their responsibilities.”

Seyyed Ahmad Safaei, the clerical representative of Qazvin, also spoke of Ayatollah Borujerdi’s message, and requested that through a plan, the Baha’i sect be declared illegal.

But since some members said that, in reality, this sect was [already] illegal, and also [since] Mr. Alam believed that this was in accordance with the law, the matter was kept silent.

As our government reporter has [found during investigation], the extent of the measures to be taken to combat this sect is very broad and the members of parliament at the meeting were considering having the plans signed by several representatives and presented to the president [speaker of the parliament], and through that, to request the illegal status of the Baha’i sect and [taking away] their right to Iranian citizenship.

Mr. Safaei read the said plan in the parliament, and said, “All those who are Muslims should sign this plan”. However, as it has been reported, the government, which was already aware of these proceedings, and had outsmarted [the parliament] by issuing the Circular in question—which implies that “involvement of the individuals and groups with no responsibility will jeopardize the security and order”—has attempted to prevent the occurrence of the unexpected incident.

Also, because the government’s preoccupation with the issue of the Baha’is had caused postponement of other matters and taking effective steps to combat the corruption, the government officials deemed it wise to bring the matter to closure.