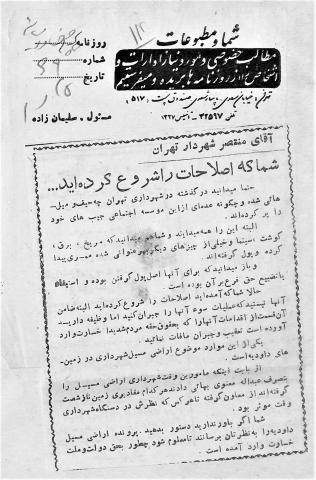 Mr. Montaser, the Mayor of Tehran

You who started the reforms...

You must know what misappropriations have taken place in the Municipality of Tehran in the past, and how many of these social institutions have filled their pockets.

Of course, everybody knows this, and you are also aware that from the ice, electricity, meat, cinema, and many other things, they have found a way to make money.

And you also know that for them the principal matter was to grab money; demanding rights or wasting the rights, has been of secondary importance.

Now that you have come, you have started the reforms, but you are not their guarantor to make up for their misdeeds; you have a duty to pursue and compensate for those parts of their actions that have severely damaged the rights of the people.

One of these cases is the issue of municipal watercourse lands in Davoodiyeh.

Back then, the municipal officials gave ownership of the watercourse lands to Baha’i, Abdollah Manavi, and each one received some land as kickback, from the deputy to everyone whose opinion was effective in the municipal system at the time.

If you do not believe it, instruct them to open the case of Davoodiyeh watercourse lands, so that you will find out how the government and the nation’s rights have been affected.