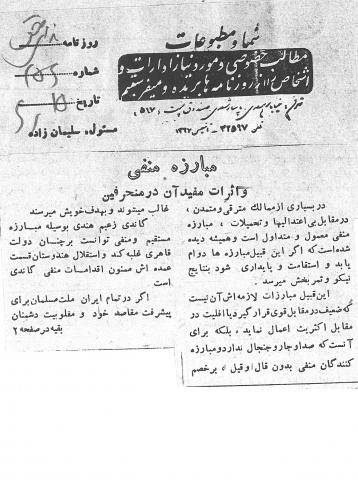 An Adverse Campaign and its Affirmative Results on the Divergent

According to the news we received, an adverse campaign began by the enthusiastic and enlightened people of Najafabad against the Baha’is, which was carried out properly and with courtesy, and produced great results in a short time.

Residents of Najafabad, in order to defeat the limited number of those who have strayed from God’s flock, decided to refrain from doing business, socializing, or conversing with them, and to obey the fatwa of the religious leaders, and cut all ties with them—including any type of transaction or association, even in the public bath, for shaving. Sharing transportation, buying or selling bread, meat, fruit, all [these were] to be held [back] from them. Since some of them had been enticed owing to being poor, upon observing these conditions, they questioned, “What is this religion we hold that we are ashamed of naming, or mentioning the names of its prophet and leaders!”

In brief, a few of them, during the first few days, and gradually more of them, went to Najafabad’s religious leaders and expressed their regret and remorse, and recited the verses: (I bear witness that there is no God but God, and Mohammad is the Prophet of God, and Ali is the Guardian of God). They renounced and repented from association with the religion of Baha. Each one printed and published a letter of remorse. Among them, signed papers by Doctor Nematollah Tayebi, Jalal Sadeghi, Mohammad Zeini and Malekan, who renounced Baha’ism in Sharia notaries, have reached us.

Such is the result of campaigns without uproar or tumult which resulted in the return of a number of God’s flock.