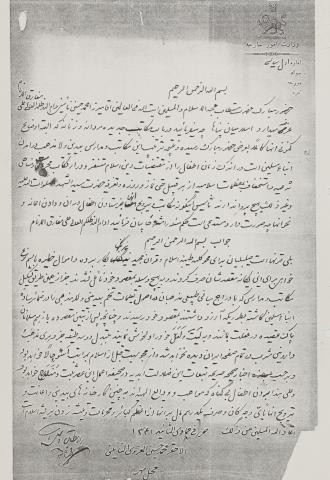 In the Name of God, the Compassionate, the Merciful

The following is conveyed to Hojatoleslam Ayatollah Mirza Muhammad-Hossein Naini.

What do the Islamists say about the new schools for men and women, whose current situation has been completely communicated to you? The outcome of organizing these non-religious and atheistic schools is the conversion of Muslim children. In a short time, they cause children to hate the requirements of the religion of Islam, and they do not have any fear in committing the religious prohibitions and disregarding the great Islamic laws of all kinds, even obligatory prayer, fasting, mourning for His Holiness Seyyed’ul-Shohada [Imam Hussain] (PBUH), etc. What are the conditions for the establishment of such schools, the promotion of sending the children to them, and giving donations to them? It is requested that you provide a detailed explanation of the matter.

Reply – In the Name of God, the Compassionate, the Merciful

Yes, for centuries the crusaders have used tricks to erase the good word of Islam and the Holy Quran and have spent large amounts of money in the name of altruism for this one purpose. And they did not achieve their goal by any means except by this same establishment of schools, which, by including the principles of nature-worshippers in their basic teachings, planted the seed of atheism and secularism in the simple minds of the children of Muslims and achieved their goal as they had wished. If, after explaining the purpose, the pure Muslims still remain neglectful and rejoice in their evasion, after two or three cycles no one will be left in Iran except followers of materialism and Darwinism. It will be much [illegible] than the pre-Islamic [wise men], and according to correct and explicit news, the consequences of this eternal aberration will be recorded in the book of deeds of this age. For this reason, taking innocent children, who are the gifts and blessings of God, to such atheistic factories, supporting and promoting them in every possible way and spending a fortune on them, is one of the greatest prohibitions, and [causes the] uprooting [of] Islam.

May God aid the Muslims in this

Copy is identical to the original