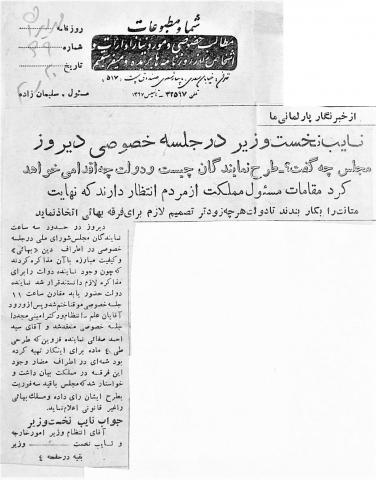 From Our Parliamentary Reporter

.... Yesterday, members of the National Consultative Assembly held a private meeting, and consulted for three hours about the “Baha’i” religion and conditions of the campaign against it. Since they deemed the presence of a representative of government to be necessary, it was decided that a representative of the government would attend the meeting. The private meeting was temporarily closed at 11:00 [a.m.].

The private meeting was reconvened after the arrival of Mr. Alam, Mr. Entezam and Dr. Amini, and Mr. Seyyed Ahmad Safaei, the representative from Qazvin, who had prepared a plan for this purpose within the past four months, spoke briefly about the harms of this sect in the country, and demanded that Parliament, by insertion of three urgency clauses, vote for his plan and declare the Baha’i Faith as illegal...

Answer by the Deputy Prime Minister

Mr. Entezam, the minister of foreign affairs and deputy prime minister, while confirming the statements of the members of parliament and the principle of this idea, stated that since this was a political issue, it should be considered carefully and attention be paid to all its aspects.

What is imperative to mention when discussing the campaign against the Baha’is—and it was coincidentally discussed in the corridors of Parliament—is maintaining order and peace, and not interfering in the government’s affairs, because the government has made a firm decision to deal with this matter…