Measures to restrict involvement of Baha’is in many business categories 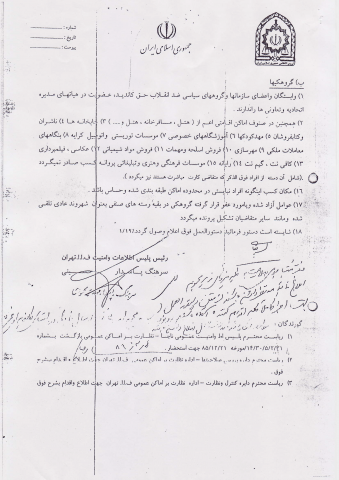 Police Force of the Islamic Republic of Iran (Naja)

To:  Esteemed Commanders of Police Forces of the Provincial Regional Municipalities—Heads of the Public Intelligence and Security Force;

Subject:  Review of the eligibility of individuals belonging to [anti-revolutionary political organizations and other illegal] groups and to the perverse Baha’i sect

May peace be upon Mohammad and His family!  With respect, based on the instructions received from the Head of the Public Intelligence and Security Force (NAJA)—Public Places Supervision (number 14/30/5/2/31, dated 21 Esfand 1385 [12 March 2007])—and noting the increase in the number of requests from the adherents of the perverse Baha’i sect to obtain business licences and secure their rightful and legal presence in the trade community once they have acquired their business licences; and in order to facilitate the ongoing monitoring and supervision of their activities and to halt—to the extent possible—their [the Baha’is’] extensive presence in sensitive and important trade organizations, as well as to stop individuals from [anti-revolutionary political organizations and other illegal] groups from requesting business licences, it is necessary for measures to be taken [as outlined in] the points below [which are] based on instruction number

B. [Anti-revolutionary political organizations and other illegal] groups

Also, business licences will not be issued for:

[Handwritten note at the bottom of the page 1]

[Handwritten note in the middle of page 2]

Letter from 54 economists to stop economic discrimination against Baha’is

Refusal to issue business license to Amrollah Manouchehri in Kashan

Dr Jalal Vahdati banned from practicing as Pharmacist in Yazd

Refusal to issue a business licence for professional photography

Derakhshani Pharmacy in Qaemshahr not allowed to operate

Baha'is should not be allowed to run bakeries, dairies, and any other businesses dealing with food as they are unclean

A requirement for getting license to operate a makeup school: applicants must be Muslim or belong to one of the official religions