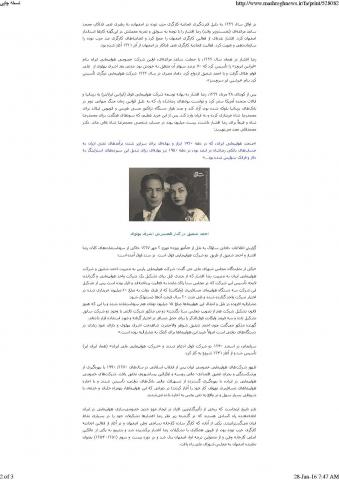 Who is the Father of Private Aviation in Iran?

According to the Mashregh News History Group, the formation of private airlines in Iran has a story. Originally, its founder was Reza Afshar; that is, he can be called the “The Father of Iranian Private Aviation.” We have many such “fathers” in various sectors of trade, finance and industry. On this occasion, I want to mention that famous poem by Mirzadeh Eshghi about the “The Father of the Iranian Nation”, which I do not mention for moral reasons.

In his youth, Reza Afshar was known as “Reza Dara [the wealthy Reza]” and “Reza Shafizadeh” and eventually became officially named “Mirza Reza Khan Afshar”. Originally from Gorgan, he was from a Baha’i family and was educated at the American College in Urmia.

The leaders of the Baha’i sect, as contractors, took over much of the intelligence and infiltration activities of the British intelligence service in the Jungle Movement. Reza Afshar was one of these infiltrators. He joined the Jungle Movement and was in charge of finance and cashier of the “Islamic Unity Committee”. He finally stole 84,000 tomans of the fund’s balance, fled to Tehran, became rich and then went to the United States. In the United States, he was very close to Nabil’ul-Dawlih (Ali Gholi Khan Zarrabi Kashani), a Baha’i leader and a thirty-third degree Mason.

In the same year, 1323 [1944/1945], with the support of Sa’ed Maraghei, Reza Afshar established the first private airline in Iran, called Iranian Airways, in which he owned 70% of the shares. Sometime later, Ashraf Pahlavi divorced Ali Ghavam and married Ahmad Shafiq. This Egyptian groom founded another airline in 1333 [1954/1955] called Persian Air Services. Iran’s aviation industry, which, in the 1930s, was a tool and an excuse for Iranian oil revenues to flow into Reza Shah’s bank accounts in London, also became an excuse in the 1950s to convert these sterling deposits into dollars and Swiss francs...

The irony of history is that some of the people most influential in creating a new wave of aviation privatization in Iran continued the path of those who, in the past, under the supervision of people like Reza Afshar, spread their organization in many parts of Iran. One of them, who as a simple worker in the Vatan Textile Factory in Isfahan and was initially an activist in the Tudeh Party trade union, was raised through cooperation with Reza Afshar’s organization and gradually became one of the main owners of the Vatan factory and one of Isfahan’s first wealthy people. In the twenty-third term (1350-1354 [1971-1975]) he was elected to the National Constitutional Assembly as a member for Isfahan.