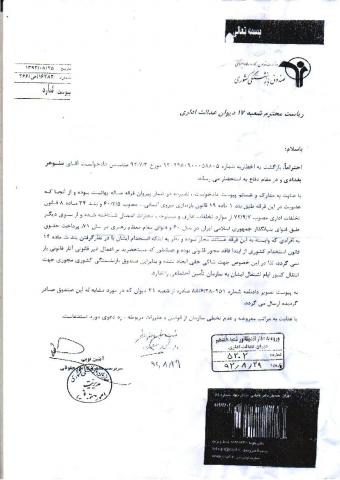 Honourable Head of Branch 17 of the Court of Administrative Justice

As indicated in the motion’s documents and enclosures, the individual is a follower of the perverse sect of Bahaism.  Considering that––pursuant to section 1 of Article 19 of the Human Resources Reform Act, ratified 5 Mehr 1360 [27 September 1981], and Section 34 of Article 8 of the Employment Infractions Act, ratified 7 Azar 1372 [28 November 1993]––membership in this sect is regarded as an employment infraction and deserves the punishment of discharge [from employment]; and furthermore, according to the fatwa of the founder of the Islamic Republic of Iran issued in 1360 [1981/1982], and that of the Supreme Leader in 1371 [1992/1993], payment of remunerations to individuals associated with this sect is not permissible; and bearing in mind that his employment, according to section ‘th’ of Article 14 of the State Employment Act was unlawful from the beginning, and, as you are well aware, “there is no legal entitlement to unlawful actions”; in this instance, the appellant has no legal rights.  Thus, the National Pension Fund has no justification for transferring the monies deducted from his past salaries to the Social Security Organization.  A facsimile of court order number 951 - 28 Shahrivar 1388 [19 September 2009] issued by Branch 21 of the Court in a similar case is attached.

In light of the above, and in order for the organization to avoid violation of regulations on this matter, it is requested that the motion be denied.

Registered by Branch 17 of the Court of Administrative Justice