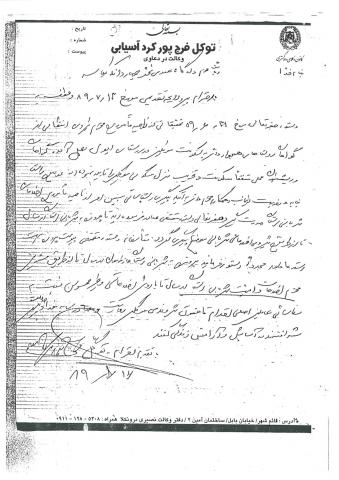 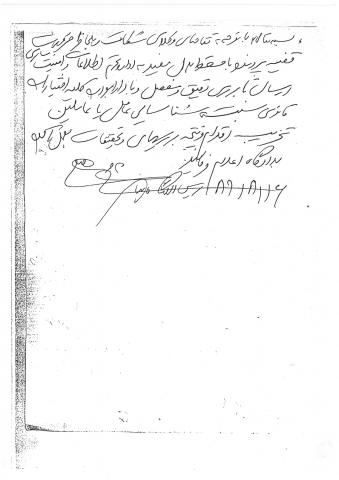 The Judge of the Public Court of Chahrdangeh District of Kiasar

I wish to respectfully inform you that, following the submission of the complaint dated 13 Mehr 1389 [5 October 2010] and referring to Your Honour’s order of 31 Shahrivar 1389 [22 September 2010], an investigation was carried out by the esteemed law enforcement officers, from the witnesses of the neighbouring villages, regarding the places of residence of the complainants in the Village of Ivel. The local witnesses and the elders unitedly [attested to] the places of the residence and the demolition of the residential houses of the complainants. In this regard, at my request and that of my esteemed colleague that the police intelligence officers of the province follow up and identify the perpetrators of the [act], Your Excellency issued an appropriate order to send the case to the provincial police, to be followed up by the police intelligence force.

Unfortunately, the appropriate order is not attached to the file. It is requested that you again issue the order to send the case to the police of Mazandaran Province, so that, through the respected officials of information and the security police of the province, the main perpetrators will be identified in an informative and tangible way, that the citizens’ rights are respected, and all live honourably in the shadow of God and justice, in peace and comfort.

[Handwritten note on the back of the page:]

According to the request of the lawyers of the suspects and due to the necessity of the case, while keeping [unreadable] useful, send it to the respected information and security office of Sari for a detailed investigation, and with all legal authority, identify the perpetrator or perpetrators of the destruction. Please let the court know of the result of the investigations.