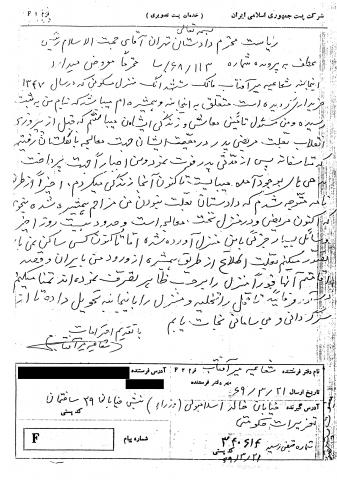 In reference to case number 68/113/SA, it is respectfully conveyed that I, Shoaiyyeh Miraftab, am the owner of the entire six parts of a residential home which was purchased in 1347 [1968/1969]. [The house], which is registered in my name, belongs to me and my sister, and I am responsible for her expenses and livelihood.

Before the victory of the Revolution, owing to my father’s illness, I went to England with him for treatment. Sadly, my father died after a while, and I was forced to live there until now to pay the debts that were incurred. Recently, through a letter, I realized that the public prosecutor has disturbed my sister because I am not there, in such a way that she is now ill and receiving treatment at home. During the last twenty days or so, very minor items have been brought into the house, but no one is living there yet. I assume that because of being informed of my arrival in Iran and my intention to live there, through my sister, they have possessed the house in appearance.

I ask you to please issue an order to have the place evacuated and to return the house to me so that I am relieved of bewilderment and distress.

[Inside a box at the bottom of the letter]

Address of the sender: [redacted]

Stamp of the sending office

Address of the receiver: [Address]