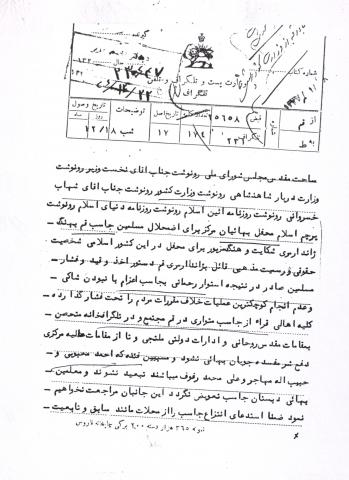 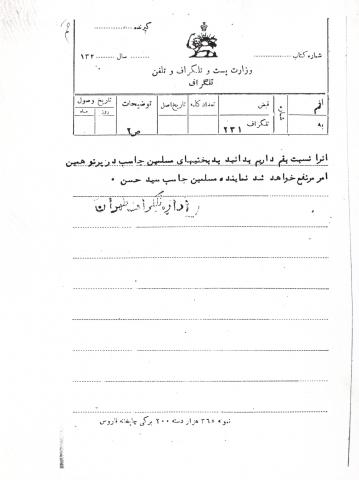 His Excellency, the Prime Minister

Ministry of the Royal Court

The [Central] Assembly of the Baha’is[1], in order to eradicate the Muslims from Jasb of Qom, have complained to the Gendarmerie Regiment. The Regiment has recognized, in this Islamic country, and given legal status and religious recognition [to the Baha’is], and issued orders to the Gendarmerie of Qom to arrest, restrict and pressurize Muslims. As a consequence, Sergeant Rahmani was sent to Jasb. Although there was no plaintiff and not even the smallest illegal offence was committed, he put pressure on the people, causing the locals to run away from villages and gather in Qom and tahasson[2] in the post office. They sought protection from the authorities of sacred religion, government and the high [government] authorities in the capital, and threatened that they would not return to the village until the removal and banishment of the evil and corruption-seeking Baha’is and those responsible for this sedition, such as Ahmad Mahboubi, Habibollah Mohajer, and [Ali]-Mohammad Rafouf [Rafraf], and the removal of the Baha’i school teachers of Jasb. Also, we request that Jasb be separated from Mahalat [jurisdiction] and come under Qom [jurisdiction], as it was previously. You will realize that the misfortunes of Jasb will be removed when this action [re-joining Qom jurisdiction] is taken.

Representative of the Muslims of Jasb, Seyyed Hasan

[Stamp of the Telegraph Office of Tehran]

[2] [This was a form of protest, which means to take (refuge in a) sanctuary; it is also used to seek protection]

Ahmad Mahboubi's estate not to be confiscated