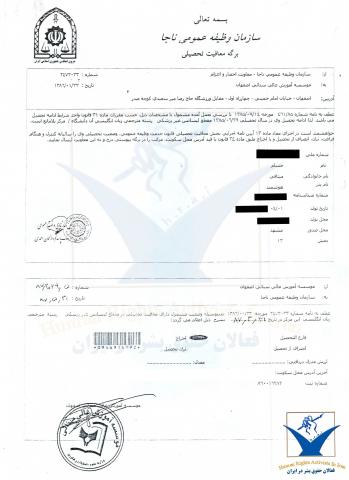 Certificate of Exemption for Education

Security Forces of the Islamic Republic of Iran

From: NAJA Military Service Organization – Deputy for Summons and Dispatch

In reference to letter number 461-85, dated 14 Azar 1385 [5 December 2006], after investigation it was decided that, according to the provisions of Article 31 of the law, the draftee with the following information is eligible for higher education. Therefore, it is permissible for him to continue his non-medical undergraduate studies in English translation in the academic year starting 29 Shahrivar 1385 [20 September 2006].

Kindly monitor his education status annually, as per Article 13 of the executive by-laws concerning the exemption for educational reasons section of the military service law, and record his status (time off/drop out/withdrawal/expulsion from university), as per Article 34 of the law, with a notation of his residential address, and forward the information to this Office.

[1] [NAJA:  Police Force of the Islamic Republic of Iran]

Baha'i conscripts should only be used in menial services

Hedayatollah Darfar to be included in random selection for conscription

Circumstances of Yousef Ilkhchi Moghaddam's death while serving in the army

Rouha Ferdowsian's account of how her son, Mehrdad Badkoubeh was drafted into the Army to do his military service and was killed in Iran/Iraq war

What was the cause of Yousef Ilkhchi Moghaddam's death while serving in the army?

Reply to Dr Shahbahrami about circumstances of the death of his son, Farhang, in Iran-Iraq war

Dr Shahbahrami demands information about the death of his son, Farhang, while serving in the army

Offer to pay compensation to parents of Farhang Shahbahrami, who was killed in Iran-Iraq war

Burial of a Baha’i soldier killed in war

Are the Baha'i family of Farhang Shahbahrami, killed in action, entitled to benefits of war martyrs?

Confirmation that Yousef Ilkhchi Moghaddam was "martyred" in Iran-Iraq war

Yadollah Atrian enlisted for military service, and ready to be deployed